Authorities are struggling to keep evacuees, some 50,000 of whom fled to shelters after Taal volcano burst to life Sunday, away from the danger zone around the volcano. 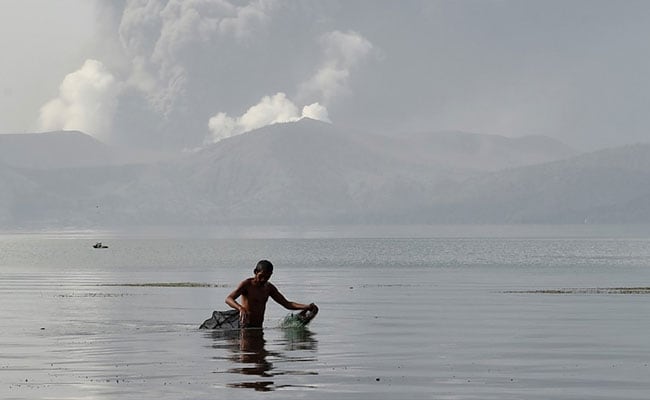 Philippines' authorities have warned that the Taal volcano might erupt again in "hours or days".

The threat of the Philippines' Taal volcano unleashing a potentially catastrophic eruption remains high, authorities warned Thursday, saying it was showing dangerous signs despite a "lull" in spewing ash.

Scores of earthquakes rattle the region daily and large fissures are opening up in the ground, which means the magma that would fuel a major eruption is still flowing beneath.

Authorities are struggling to keep evacuees, some 50,000 of whom fled to shelters after Taal burst to life Sunday, away from the danger zone around the volcano.

People are trying to get back to homes they left in a hurry to get a change of clothes, feed livestock and pets and check on properties damaged by the fissures or covered with a thick layer of ash.

"Please allow us to observe the lull period for now. We are studying what that means," Maria Antonia Bornas, a scientist from the Philippines' seismology agency told reporters.

"A long lull could be just a break from volcanic activity," she said. "The danger remains."

Authorities have warned since Sunday that the volcano, which sits south of Manila and is one of the country's most active, could let loose a powerful eruption in "hours or days".

Taal's last eruption was in 1977, but it has a long history of activity. In 1965 an eruption at the volcano, which is a popular tourist attraction set in a picturesque lake, killed some 200 people.

The country's most powerful explosion in recent years was the 1991 eruption of Mount Pinatubo, about 100 kilometres northwest of Manila, which killed more than 800 people.

(Except for the headline, this story has not been edited by NDTV staff and is published from a syndicated feed.)
Comments
Taal volcanoPhilippinesPhilippines volcano