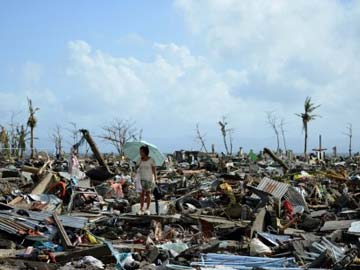 A surivor walks among the debris of houses destroyed by Super Typhoon Haiyan in Tacloban in the eastern Philippine island of Leyte on November 11, 2013.

Manila: The Philippines will need nearly $3 billion to rebuild parts of the country destroyed by the deadliest typhoon in its history, the presidential palace said today.

"The task is really daunting is it not? That's why we are saying it will take about 130 billion pesos ($2.94 billion) to put everybody in at least a better situation than where they were," he said according to a transcript released by Malacanang palace.

Haiyan smashed across the central islands with peak winds of 315 kilometres an hour on November 8, unleashing tsunami- like storm surges that killed thousands of people on the islands of Leyte and Samar.

The official death toll stood today at 6,033, with the authorities still looking for 1,779 people listed as missing.

About a million houses were also destroyed, leaving four million people homeless, according to the government's National Disaster Risk Reduction and Management Council.

Tropical Storm Thelma, which killed about 5,100 people on the Leyte city of Ormoc in 1991, was previously the deadliest storm recorded in the Philippines, which is hit by about 20 typhoons and tropical storms each year.

Aquino was speaking on the sidelines of a summit between Japan and the Association of Southeast Asian Nations, the palace said.
Comments
Typhoon