Paris Vows Security Will Not Rain On Its Fashion Parade 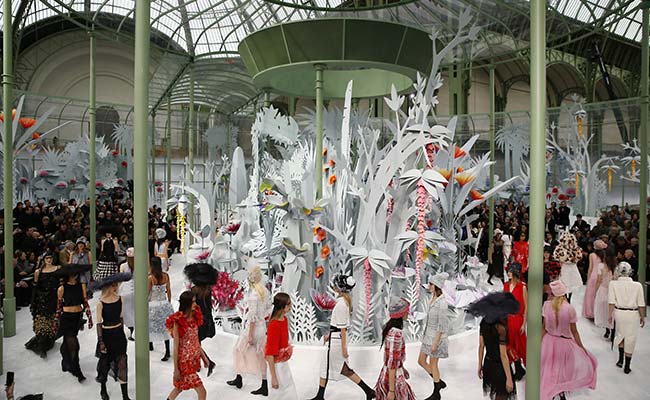 Paris: Paris dusts itself off to reclaim its place as the capital of fashion Wednesday, with the start of its menswear shows amid tight security after the November terror attacks.

With some of the world richest fashionistas due in the French capital for the haute couture collections which follow the 50 or so menswear shows, the organisers are taking no risks.

Reinforced security and identity checks have many in the industry fearing long queues which could play havoc with the tightly scheduled catwalk shows.

The extra precautions come after gunmen and suicide bombers acting in the name of the Islamic State group attacked cafes, restaurants, a concert hall and the national stadium on November 13, leaving 130 dead.

Major fashion houses including Valentino and Yohji Yamamoto warned clients and guests to arrive early while Chanel said it was "reinforcing our precautions following the advice of the authorities".

But the new head of the French Couture Federation Pascal Morand insisted Tuesday they wanted to make the autumn-winter shows as secure as possible without causing too much worry or inconvenience.

"The most efficient security measures are not necessarily the most visible or the ones people talk about," he told AFP.

Although the shows will inevitably be affected by the sombre post-attacks mood of the city, Morand said so far there had been no major drop in the numbers of those attending, or "nothing worrying" in any case.

He said it was vital that Paris maintain its position as the world's fashion capital, and that it continues to attract the very best young designers.

"It's important that Paris is the place where you come to be anointed, where you make your breakthrough and earn you spurs," Morand said.

"Paris has really won back a lot of ground in recent years," he claimed in the face of stiffer competition from Milan, New York and London.

"Everyone knows that it is here that things happen, even if we work well with our Italian friends, and that we have absolute respect for what New York and London have done," he added.

That said, Hedi Slimane, the artistic director of Saint Laurent -- one of France's biggest fashion houses -- raised eyebrows by snubbing Paris and choosing to show his new collection in Los Angeles next month rather than Paris.

But Morand tried to play down the loss of the most rock 'n' roll of French designers, saying it was a "one-off" unlikely to be repeated. It was something that both Hedi Slimane and the fashion house wanted to do," he said.

While Saint Laurent will be absent, he said the catwalk shows will be as young and international as ever with four newcomers, the Japanese labels Christian Dada and White Mountaineering, Franco-Italian outfit OAMC and Paris-based Avoc.

The shows come at a highly charged moment for the industry with New York pushing for a major overhaul of the catwalk calendar that would see new lines kept under wraps until they go on sale.

But Paris and Milan are adamant that the status quo remain unchanged, with new collections shown four to six months before they appear in the shops.

The air of instability has filtered down to the catwalk, with big-name Dior without an artistic designer after Raf Simons walked out in October.

His own label's show on Wednesday evening is one of the week's must-have tickets, with the studio he left behind at Dior showing what they came up with in his absence on Friday.

Another talking point is Cerruti's return to the Paris catwalk after a year's absence with its new artistic director Jason Basmajian.

The haute couture spring-summer shows kick off on Sunday with Versace, with Chanel, Dior and Chinese-born newcomer Yiqing Yin to follow.