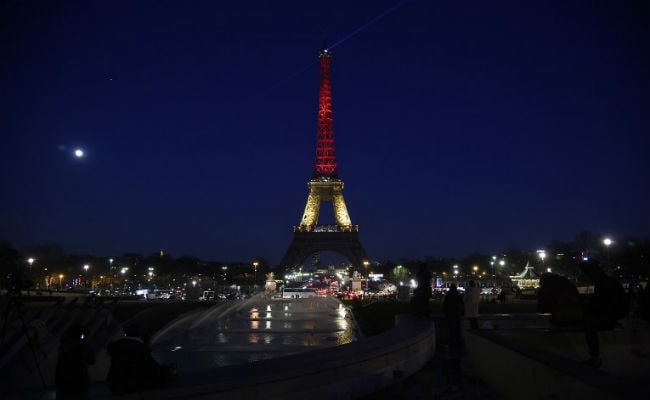 A picture taken on March 22, 2016 shows the Eiffel Tower in Paris illuminated in colours of the Belgian flag in tribute to the victims of terrorist attacks in Brussels. (AFP Photo)

Paris: The Eiffel Tower lit up with the colours of the Belgian flag on Tuesday evening in a show of solidarity with Brussels after deadly attacks in the Belgian capital sent a shudder of recognition through Paris.

ISIS claimed responsibility for the assaults on Brussels airport and a metro train earlier on Tuesday - a stark reminder of the shootings and suicide bombings which killed 130 people in Paris last November and which were also claimed by the terrorist Islamist group.

The blasts in Brussels occurred four days after the arrest in the Belgian capital of a suspected participant in the Paris attacks.

Police in both capitals had been on alert for post-arrest reprisals.

A French official later said eight French nationals had been wounded, three of them seriously, in Tuesday's attacks.

As TV images showed a similar light show playing across the Brandenburg Gate in Berlin, at French President Francois Hollande's official residence, the French tricolour flew at half mast and Belgian flags stood at the main entrance.

In another show of solidarity, Rome lit up its famed Trevi Fountain and its city hall with the colours of the Belgian flag.

"There is no security in Europe any more," said Samira, a 42 year-old social worker in Paris. "It's very worrying."

The front page of Le Monde daily bore a cartoon depicting a person draped in the French flag with an arm around another wearing the black, yellow and red national colours of Belgium, with the dates November 13 and March 22 inscribed underneath.

The Gare du Nord station in Paris swarmed with police, its Brussels-bound Thalys trains - on which a gunman was disarmed last year - stuck at platforms since the morning.

Yeng Yi, 25, a Chinese student based in Barcelona, was among those affected by the train cancellations.

"I'm terrified by what happened ... Maybe I'll go back to Barcelona," she said.

Others were more sanguine.

"We're not worried," said Kerstin Ruffert from Duesseldorf, Germany, travelling around Europe with her husband and their two daughters. "It could happen anywhere in Europe, so we won't change our travel plans."

Hoteliers in Paris, the world's most visited city, were jittery. Hit hard by the November killings, they have been hoping for an upturn linked to the Euro 2016 football tournament that starts in June.

Figures from specialist consultants MKG Group put annual revenue per room down 13 per cent in 2016 to date, with last year's attacks blamed for much of the drop.

"The Brussels attacks are of course really bad news for the industry, which has been under pressure since January 2015," said Georges Panayotis, MKG Group President.
© Thomson Reuters 2016