Many Palestinians had queued from before dawn at the Israeli checkpoints that control access to annexed east Jerusalem from the rest of the occupied West Bank. 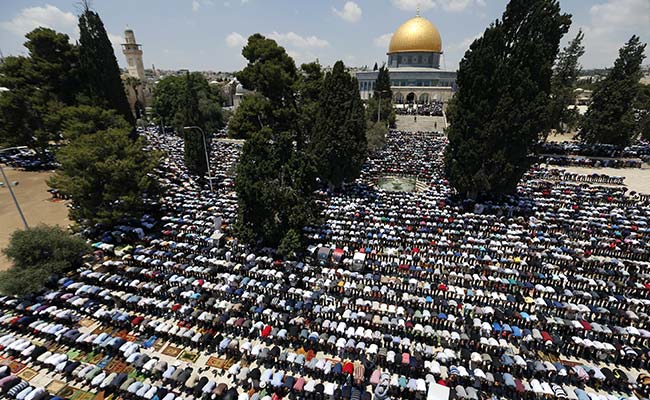 Thousands of Palestinians poured into Jerusalem to attend the first Friday prayers of the Muslim fasting month of Ramadan at the Al-Aqsa mosque compound, Islam's third-holiest site, AFP correspondents reported.

Many had queued from before dawn at the Israeli checkpoints that control access to annexed east Jerusalem from the rest of the occupied West Bank.

Police reinforcements were deployed across Jerusalem's Old City to provide security around the ultra-sensitive mosque compound, which is also Judaism's holiest site.

A spokesman for police told AFP that over 100,000 had participated in the prayers on and around the mosque compound.

Israel had loosened a number of restrictions ahead of Ramadan, which began on Saturday, to enable easier travel from the West Bank to Israel for Friday prayers and family visits.

Women of all ages and men over 40 do not need entry permits in order to access Jerusalem for Friday prayers. Israel also allowed 100 men and women over the age of 55 from Gaza to enter Jerusalem for prayers, police said.

Abdeljawad Najjar, 61, from the northern West Bank city of Nablus, was among those queueing at the Qalandia checkpoint, north of Jerusalem.

"It is a religious obligation to pray at Al-Aqsa, regardless of the difficulties and obstacles," he said.

Kefaya Shrideh, 40, also from Nablus, voiced the concern, shared by many Palestinians, that far-right members of Israel's governing coalition might seek to change the longstanding rules governing the mosque compound, under which Jews can visit but not pray.

"It is important for us to pray at Al-Aqsa and not to forsake it, because we are afraid the Jews will take it," she said.

Israel seized east Jerusalem in the Six-Day War, which began 50 years ago on Monday, and later annexed it in a move never recognised by the international community.

Known to Jews as the Temple Mount, the mosque compound is one of the most sensitive flashpoints of the Israeli-Palestinian conflict and is the scene of frequent disturbances.

Israel claims Jerusalem as its united capital, while the Palestinians claim the city's eastern sector as the capital of their future state.

(This story has not been edited by NDTV staff and is auto-generated from a syndicated feed.)
Comments
Ramadan 2017Israel PalestineAl-Aqsa mosqueTemple Mount