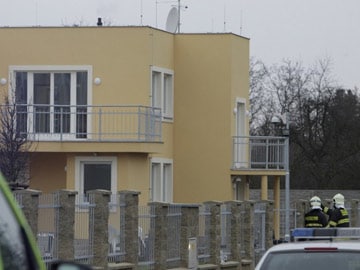 A picture taken on January 1, 2014 shows firemen standing in front of the residence of Palestine ambassador Jamal al-Jamal in Prague.

Prague: Palestinian diplomats have apologised for hiding illegal weapons at the Prague embassy where a blast killed the ambassador on New Year's Day, the Czech foreign ministry said on Tuesday.

After the deadly blast, police found 12 firearms at the embassy, including submachine guns and sidearms that were not officially registered in the Czech Republic.

They have refused further comment on the weapons pending the results of an official probe.

The DNES newspaper said police found Skorpion VZ61 submachine guns and VZ82 sidearms produced in the former Czechoslovakia and supplied to the Palestine Liberation Organisation before communism fell in Czechoslovakia in 1989.

The Palestinians also apologised "for the incident that resulted in the tragic death of Palestinian ambassador Jamal al-Jamal on January 1," the ministry statement added.

Jamal, 56, died only three months after taking office, following an explosion that occurred soon after he opened a safe.

Czech police have described it as an accident, but have refused further comment pending their investigation.

The late diplomat's daughter Rana al-Jamal, however, believes her father was murdered.

Promoted
Listen to the latest songs, only on JioSaavn.com
"Both sides have agreed it is necessary to wait for the outcome of the police investigation... The Palestinian side has expressed its resolve to fully accept its conclusions," the Czech foreign ministry said.

"The Palestinian side stressed it had drawn the relevant conclusions and taken the necessary measures to prevent similar incidents from happening," it added.