Khalida Jarrar was arrested earlier this month over her membership of a movement that Israel considers a terrorist organisation after having been released from prison only a year before. 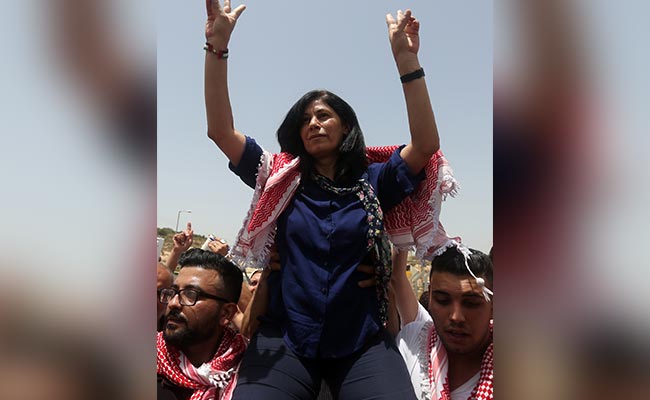 Jarrar was arrested earlier this month over her membership of a movement that Israel considers a terrorist organisation after having been released from prison only a year before.

A legislator in the largely defunct Palestinian parliament, she was given a six-month administrative detention order, said the Addameer rights NGO that she used to head.

A confirmation hearing will be held at Ofer military court in the Israeli-occupied West Bank on July 17, Addameer said in a statement issued late Wednesday.

The "detention constitutes an attack against Palestinian civil society leaders", the movement said.

The Israeli army did not immediately reply to a request for comment on Jarrar's case.

Jarrar is a senior figure in the Popular Front for the Liberation of Palestine, a Marxist party considered a terrorist organisation by Israel, the United States and European Union.

Many of its leaders are in custody and Jarrar has been jailed multiple times.

Israel has said she was arrested for her involvement with the PFLP.

The 54-year-old had only been released in June 2016 after 14 months in an Israeli jail for allegedly encouraging attacks against Israelis.

Israel says it is intended to allow authorities to hold suspects while continuing to gather evidence, with the aim of preventing attacks in the meantime.

But the system has been criticised by Palestinians, human rights groups and members of the international community who say Israel abuses the measure.

Promoted
Listen to the latest songs, only on JioSaavn.com
The Palestinian Prisoners' Club says around 6,500 Palestinians are currently in Israeli jails, including around 500 in administrative detention.

Jarrar is the 11th member of the Palestinian parliament, which has not met since 2007, currently jailed, according to the prisoners' club.