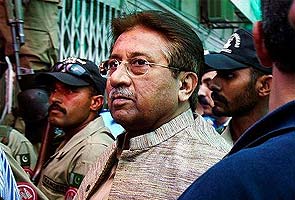 Islamabad: Pakistan's former military ruler General Pervez Musharraf will be charged with criminal conspiracy and murder of ex-Prime Minister Benazir Bhutto on August 6, even as his bail plea in the Akbar Bugti killing case was rejected today.

General Musharraf was produced in an anti-terrorism court in Rawalpindi amidst tight security for today's hearing in the Bhutto assassination case headed by judge Habibur Rahman.

Mr Rehman fixed August 6 to be the date to formally charge 69-year-old Musharraf.

The former President's indictment would be an unprecedented move in a country ruled by military for more than half of its life.

The Rawalpindi court is hearing the case of the killing of two-time PM Bhutto.

Mrs Bhutto was assassinated in a gun-and-bomb attack outside Rawalpindi's Liaquat Bagh on December 27, 2007, when General Musharraf was the president. She was killed after addressing an election campaign rally in the city.

State prosecutor Chaudhry Azhar Ali told media that "Musharraf will be produced at the next hearing on August 6".

The charges relating to criminal conspiracy and murder will be read out before Musharraf and he will have to sign the charge sheet, he said.

Mr Rehman ordered the police that the accused should be present in the court to sign the charge sheet and respond to the charges.

General Musharraf was not produced in court in the last two hearings due to security reasons, prompting the judge to reprimand the police and order them to present the accused or make arrangement for hearing of the case in the jail.

Promoted
Listen to the latest songs, only on JioSaavn.com
The request for restoration was made by General Musharraf's lawyer Ilyas Siddiqui.