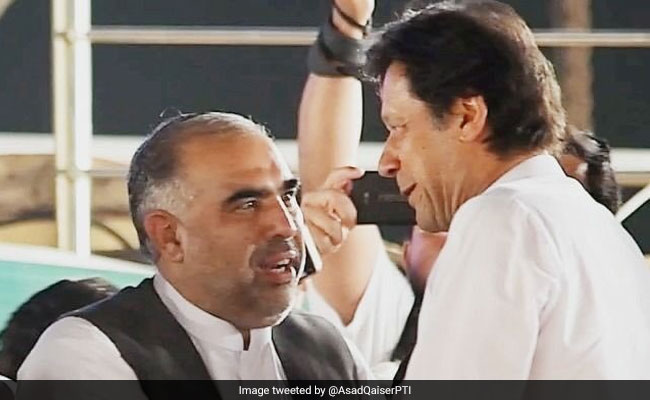 Pakistan's newly-elected Parliament today voted an ally of Prime Minister-in-waiting Imran Khan as the Speaker of its lower house, kicking off the process of transition and handing over powers to the new government.

The election was held through secret ballot.

Outgoing Speaker Ayaz Sadiq administered the oath to Qaiser among loud chants of "vote ko izzat do" (give value to the votes) by opposition lawmakers, the report said.

The new Speaker will oversee the election of his deputy.

After the announcement, Mr Qaiser shook hands with opposition leaders seated in the front row. He will supervise the election process of the prime minister.

The PTI has fielded Qasim Suri for the post of Deputy Speaker while the joint opposition has nominated Asad Rehman of Muttahida Majlis-i-Amal (MMA).

Strict security measures were put in place to avoid any untoward incident during the proceedings.

On Monday, Mr Khan along with 329 newly-elected members of the National Assembly took the oath, setting the stage for the cricketer-turned-politician to form the next government, only the second democratic transition of power in the country's history.

The maiden session of the 15th National Assembly saw Speaker Sadiq administer the oath to the leaders in the 342-member house, 19 days after Khan-led PTI party emerged as the single largest in the general elections.

Earlier, PTI senior vice president Shah Mahmood Qureshi told media that their candidates would easily win the majority votes, saying the joint opposition alliance would soon fizzle out as cracks have begun appearing in their ranks.

He was referring to PPP expressing reservation over nomination of Shehbaz Sharif as the joint candidate of the opposition for the post of prime minister.

The PML-N, the PPP and the MMA forged an alliance after elections and decided to field joint candidates for the posts of Prime Minister, Speaker and Deputy Speaker.

However, PPP's Khursheed Shah said that his party has "serious reservations" over Shehbaz's nomination due to his past controversial statements against their leadership.

The PTI has nominated Khan for the top post and he is scheduled to take oath on August 18 at the President House.

The new government faces a strong opposition as the PML-N has a final tally of 82 seats, followed by the PPP with 53 and MMA 15 seats.

This will be the third consecutive democratic government in Pakistan since 2008 when military ruler Musharraf announced general elections after serving as president from 2001 to 2008 following a coup in 1999.

The PPP formed the government in 2008, followed by the PML-N led by former prime minister Nawaz Sharif in 2013.

Pakistan's powerful military has ruled the country through various coups for nearly half of the country's history since independence in 1947. Even during the civilian rule, the generals have wielded enormous power, setting the agenda for the country's foreign and security policies.