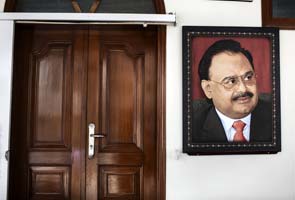 A portrait of Altaf Hussain at the offices of his political party, Muttahida Qaumi Movement, in Karachi, Pakistan

London: For two decades, Altaf Hussain has run his brutal Pakistani political empire by remote control, shrouded in luxurious exile in London and long beyond the reach of the law.

He follows events through satellite TVs in his walled-off home, manages millions of dollars in assets and issues decrees in ranting teleconferences that last for hours - all to command a network of influence and intimidation that stretches from North America to South Africa.

This global system serves a very localized goal: perpetuating Hussain's reign as the political king of Karachi, the brooding port city of 20 million people at the heart of Pakistan's economy.

"Distance does not matter," reads the inscription on a monument near Hussain's deserted former house in Karachi, where his name evokes both fear and favor.

Now, though, his painstakingly constructed web is fraying.

A British murder investigation has been closing in on Hussain, 59, and his party, the Muttahida Qaumi Movement. His London home and offices have been raided, and the police have opened new investigations into accusations of money laundering and inciting violence in Pakistan.

The scrutiny has visibly rattled Hussain, who recently warned supporters that his arrest may be imminent. And in Karachi, it has raised a previously unthinkable question: Is the end near for the untouchable political machine that has been the city's linchpin for three decades?

"This is a major crisis," said Irfan Husain, the author of "Fatal Faultlines," a book about Pakistan's relationship with the United States. "The party has been weakened, and Altaf Hussain is being criticized like never before."

Hussain's rise offers a striking illustration of the political melee in Pakistan.

His support stems from the Mohajirs, Urdu-speaking Muslims whose families moved to Pakistan after the partition from India in 1947, and who make up about half of Karachi's population. Since the 1980s, the Muttahida Qaumi Movement has fiercely defended Mohajir interests, and in turn it has been carried to victory in almost every election and to an enduring place in national coalition governments as well.

Hussain fled to London in 1992, when the movement was engaged in a vicious street battle with the central government for supremacy in Karachi. The British government granted him political asylum and, 10 years later, a British passport.

London has long been the antechamber of Pakistani politics, where self-exiled leaders take refuge until they can return. The former military ruler Pervez Musharraf lived here until recently, and the current prime minister, Nawaz Sharif, lived here until 2007.

Hussain, however, shows no sign of going back. The Muttahida Qaumi Movement has an office in Edgware, in northwest London. But these days Hussain is mostly at home, in a redbrick suburban house protected by raised walls, security cameras and a contingent of former British soldiers he has hired as bodyguards.

From there, he holds court, addressing his faraway followers in a vigorous, sometimes maniacal style, punctuated by jabbing gestures and hectoring outbursts. Occasionally he bursts into song, or tears. Yet, on the other end of the line, it is not unusual to find tens of thousands of people crowded into a Karachi street, listening raptly before an empty stage containing Hussain's portrait, as his disembodied voice booms from speakers.

"The cult of personality surrounding Altaf Hussain is quite extraordinary," said Farzana Shaikh, an academic and the author of "Making Sense of Pakistan." "He is immensely charismatic, in the way one thinks of the great fascist leaders of the 20th century."

In Karachi, his overwhelmingly middle-class party is fronted by sharply dressed, well-spoken men - and a good number of women - and it has won a reputation for efficient city administration. But beneath the surface, its mandate is backed by armed gangs involved in racketeering, abduction and the targeted killings of ethnic and political rivals, the police and diplomats say.

Other major Pakistani parties indulge in similar behavior, but the Muttahida Qaumi Movement frequently brings the most muscle to the fight. A U.S. diplomatic  cable from 2008 titled "Gangs of Karachi," which was published by WikiLeaks, cited estimates that the party had an active militia of 10,000 gunmen, with an additional 25,000 in reserve - a larger force, the dispatch notes, than the city police.

Many journalists who have criticized the party have been beaten, or worse, driving most of the news media in Karachi to tread lightly. In June, the Committee to Protect Journalists, a lobbying group based in New York, accused the party of organizing the killing of Wali Khan Babar, a television reporter.

In the West, the Muttahida Qaumi Movement has avoided critical attention partly because it has cast itself as an enemy of Islamist militancy. In 2001, Hussain wrote a letter to then British Prime Minister Tony Blair, offering to help Britain set up a spy network against the Taliban.

Critics of the party have frequently questioned the role of British officials in facilitating its unusual system of governance. Pakistani exiles from Baluchistan, also accused of fomenting violence, have faced criminal prosecution. But Britain is not the only node of Hussain's international support network.

Through the Pakistani diaspora, the Muttahida Qaumi Movement has active branches as far afield as the United States, Canada and even South Africa, which has become an important financial hub and a haven for the group's enforcers, Pakistani investigators say.

Two police interrogation reports obtained by The New York Times cite militants from the movement who say they traveled to South Africa in between carrying out political assassinations in Karachi. One of those men, Teddy Qamar, confessed to 58 killings between 2006 and 2012, the police say. In an interview, Anis Hasan, the party's joint organizer for South Africa, denied any link to organized violence.

But if Hussain seemed immune to scrutiny at his London stronghold, his luck started to turn in September 2010 after Imran Farooq, a once-influential leader in the movement who had split from the party, was stabbed to death near his house in Edgware.

Soon after, Hussain appeared on TV, mourning Farooq with a flood of tears. But over the past year, the police investigation has turned sharply in his direction.

In December, officers from Scotland Yard's Counter Terrorism Command searched the movement's London office. Then in June they went to Hussain's home and arrested Ishtiaq Hussain, his cousin and personal assistant, who is now out on bail. The police impounded $600,000 in cash and some jewelry under laws that target the proceeds of crime.

Hussain was not available for an interview, his party said. But a senior party official, Nadeem Nusrat, speaking at the movement's London office, denied any link to Farooq's killing.

"Our conscience is clear," Nusrat said. "We have nothing to do with it."

Nusrat said the impounded money had come from political donations. And he rejected accusations, also the subject of a police inquiry, that Hussain has directly threatened political rivals, in some instances by warning that he would arrange for their "body bags."

"It's all taken out of context," Nusrat said.

Hussain has receded from public view during the recent furor. There have been rumors about mounting health problems, which Hussain's aides deny. But he cannot return to Pakistan, they say, because the Taliban could kill him.

"In Pakistan," said Muhammad Anwar, a longtime aide, "nobody can guarantee your life."

Then there are the legal threats: Over the years, dozens of murder charges have been lodged against Hussain in Pakistan, although some have been quashed in court. A more pressing question, perhaps, concerns the impact on the streets of Karachi if Hussain is forced to step down.

Some fear that without his guiding hand, tensions within the movement could split it into hostile factions - a frightening prospect in a city where political violence already claims hundreds of lives a year.

"However viciously the party conducts itself, there is an order within the apparent disorder," said Shaikh, the academic.

Even if the British government wished to crack down on Hussain, she added, it might find itself subject to appeals from the Pakistani authorities.

"The fear of Karachi going up in flames is so great," Shaikh said, "that no government can take that risk, as long as Altaf Hussain is alive."
© 2013, The New York Times News Service
Comments
PakistanAltaf Hussain