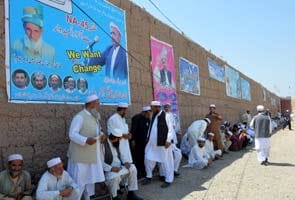 Michni: Pakistan's tribal belt may have been dubbed the world's most dangerous place by the United States, but enthusiastic tribesmen are defying the Taliban to vote for change at next week's polls.

More than 60 people have been killed in militant attacks targeting politicians and political parties since April 11, but amazingly no one in the seven districts that make up the semi-autonomous region on the Afghan border.

One of the most remote and undeveloped parts of the country, the Federally Administered Tribal Areas (FATA) provide rear bases for the Afghan Taliban, the Pakistani Taliban and other Al Qaeda-linked groups.

But after years of army offensives designed to clear out Pakistani Taliban hideouts, some of the 1.7 million registered voters in FATA say they feel safe enough to vote and even that women, normally kept in purdah, will vote.

For the first time political parties can campaign directly in FATA - a reform introduced by the outgoing government in 2011 in an effort to give tribesmen more of a stake in the country and curb militancy.

"People want change. They want a change in the system not just a change of faces," said Miraj Ali, a doctor who runs a clinic in the village of Michni in the district of Mohmand.

Tribesmen in the districts of Mohmand, Khyber, Bajaur and North Waziristan who spoke to AFP accused the outgoing government of doing nothing to improve their lives and blamed it for fighting that has displaced hundreds of thousands.

Instead they are looking to the religious parties, cricket star Imran Khan, looking to make a political breakthrough at the May 11 polls, or opposition leader Nawaz Sharif bidding for an historic third term.

"The two party leaders with the most support are Imran Khan and Nawaz Sharif," admitted Ali.

All main parties are visibly campaigning, but of the 339 candidates competing for 12 national assembly seats from FATA, only 81 represent parties - the rest are officially independents, even if some privately favour one party over another.

Life here is perhaps harder than anywhere else. Power cuts can last as long as 21 hours, compared to eight hours in the capital. Unemployment is rife. Schools have been bombed by the militants. Literacy is poor.

People complain about the arcane system of justice imposed under British-era laws and summary powers of arrest on weak terror charges.

In 2007-8, most parts of Mohmand were under Taliban control until the military went on the offensive in November 2008, flushing out the militants but displacing thousands of families.

It is now largely peaceful but few people venture out after dark, vividly remembering public beheadings and the Taliban era of fear.

"We will elect honest representatives in this election who will solve such of our problems," said school teacher Mohammad Shah, 43.

In neighbouring Khyber district, where the military is fighting the Taliban and other homegrown militants, the campaign is also in full swing, party flags flying high from shops and rooftops.

Many tribesmen are wearing party badges and insignia on their chests with every second vehicle is festooned in posters, stickers or flags.

Many candidates serve meals - rice with meat cooked in huge cauldrons - twice a day to supporters and offer cups of steaming green tea.

"Our former representatives sold us in Islamabad. They were like wolves. Now we want change, a revolution which eliminate all these corrupt people," said Raqeeb Ullah, 27, who works at a medical store.

Ullah believes Imran Khan, who publicly opposes military operations and backs peace talks with the Taliban, is the man of the moment.

"He has promised that he will end terrorism and provide education to all. Imran is a Khan and a Pashtun, he has proved his worth," he added.

In Miranshah, the main town of North Waziristan, the most notorious of the tribal districts, gunmen abducted one candidate on Wednesday.

But even here, 34 candidates are fighting for one seat.

Promoted
Listen to the latest songs, only on JioSaavn.com
"It is so good that we can vote on a party basis. It is creating political awareness among tribesmen," shopkeeper Sher Khan told AFP.