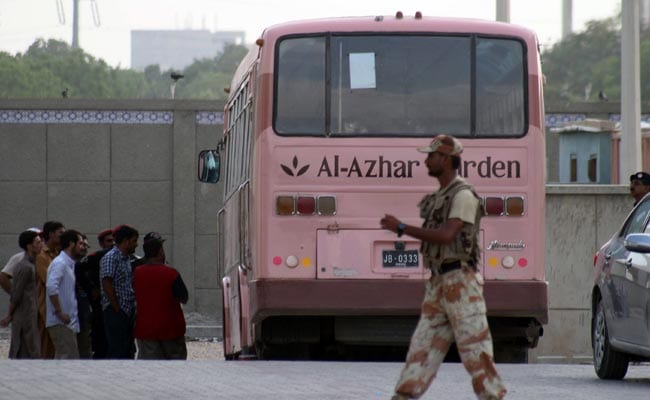 The bus that was attacked by armed gunmen in Karachi on Wednesday. (Agence France-Presse)

Dera Ismail Khan, Pakistan: The militant group that said it was behind Wednesday's massacre of 45 commuters in Karachi is a dangerous outfit with ties to Pakistan's Taliban, but intelligence sources voiced doubts about claims it had received financial support from Islamic State.

Jundullah, a Sunni Muslim organisation that targets Pakistan's minority Shi'ite community, pledged allegiance to Islamic State (IS) last year, one of several smaller jihadist groups in South Asia to do so.

It also said in November that its leaders held a meeting with a three-man delegation representing IS.

Ahmed Marwat, who purports to be a Jundullah commander and spokesman, went further this week, telling Reuters the group had received money from IS, the ultra-violent jihadist movement that controls areas of Iraq and Syria.

"ISIS brothers are supporting us a lot financially," he said by telephone from an undisclosed location. Marwat added that Jundullah planned more attacks and its aim was to impose sharia, or Islamic law, in Pakistan.

Leaflets left at the scene of Wednesday's gun attack on a bus carrying Shi'ite Ismailis referred to Islamic State and expressed hatred for Shi'ite Muslims.

Later, a Twitter account from militants identifying themselves as Islamic State claimed responsibility. It was not possible to verify their claims.

Any proof that IS has direct links with some of the thousands of Islamist militants in Pakistan and Afghanistan would spark alarm in a region where the Taliban, al Qaeda and myriad other groups carry out atrocities almost daily.

But, while analysts believe militants draw inspiration from the IS's military successes and grisly propaganda, intelligence officials in Pakistan said they doubted IS had financial ties with Jundullah.

"We have no evidence of any money trail of this kind," said one military intelligence official, when asked about Marwat's claims. "This is deep exaggeration."

Another official said Jundullah financed itself through bank robberies, extortion and kidnapping.

Falling Out With the Taliban

Foreign Ministry spokesman Qazi Khalillulah told reporters late on Thursday that IS had "no footprint" in Pakistan.

"However, our law enforcement and security agencies are vigilant and will take appropriate action, if need be."

IS leaders in the Middle East have done little to suggest they are actively involved in South Asia.

Jundullah's claim of responsibility for the Karachi killings could not be independently verified.

The security threat it poses is also difficult to judge given shifting alliances and rivalries among shadowy jihadist groups that have long been part of life in Pakistan.

Security forces used to back some militant groups to use as proxies in Afghanistan and against arch-rival India. Some elements of the security forces are accused of maintaining links, but officials deny there is ongoing support.

According to several security sources, Jundullah once had strong ties to al Qaeda's Khalid Sheikh Mohammed, suspected mastermind of the September 11, 2001 attacks, when it was founded in 2003 by a statistics student from Karachi University.

The group recruited educated, middle class Pakistanis, and in 2004 its leaders were convicted of a failed assassination attempt on General Ahsan Hayat.

Al Qaeda was gradually weakened by the US-led campaign against it in South Asia after 2001.

The remnants of the group were absorbed into the Pakistani Taliban, a distinct, though related movement to the Afghan Taliban.

According to Marwat, differences with Taliban leader Hakimullah Mehsud prompted Jundullah to leave, and they resumed their own attacks in 2012. Mehsud was killed in a US drone strike on Pakistan in 2013.

In the last three years, Jundullah has claimed responsibility for some of Pakistan's worst militant attacks, including a suicide bombing of a church in Peshawar that killed around 80 people.

Marwat said the group had ties to militants in Iran and Bangladesh, and that he had been arrested in Iran in 2006 and held for a year.

"He was Very Funny"

A Taliban commander dismissed Marwat as an upstart, underlining tensions that have emerged between the movement and smaller splinter groups.

He said Marwat used to come to their offices in Miranshah, the capital of North Waziristan, a mountainous region along the Afghan border. The city was under Taliban control until a Pakistani military offensive last year.

"Initially we didn't trust him, but he was very funny and we allowed him to sit in our media office sometimes," the Taliban commander said.

They added that the Taliban initially allowed Marwat to claim his group had carried out attacks that caused heavy civilian casualties in order to deflect anger, but eventually he went too far.

Promoted
Listen to the latest songs, only on JioSaavn.com
Angry Taliban sought to detain him, but he fled.

"He was a mysterious character," said the commander. "But some people may be using his name."
© Thomson Reuters 2015