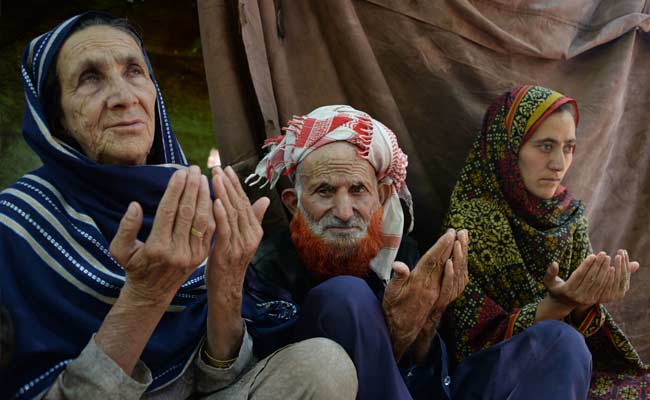 Makhni Begum (L) and Shah Zula (C) the parents of Pakistani Kashmiri convicted killer Shafqat Hussain, pray as they sit with relatives in Muzaffarabad, the capital of Pakistani-administered Kashmir on June 9, 2015. (AFP Photo)

Islamabad: Pakistan has imposed a one month moratorium on executions during Ramadan, officials said today, providing temporary reprieve for a death row prisoner whose lawyers claim he was a juvenile at the time of the crime.

On Wednesday, Pakistan hanged one man allegedly tortured into confessing to murder as a minor; despite international condemnation, and rejected an appeal from another, Shafqat Hussain, sentenced to hang for killing a seven-year-old boy in 2004.

"It is a tradition that nobody is executed in the fasting month of Ramadan and the authorities have ordered that this tradition continues this year too," said Nusrat Mangan, Inspector General of prisons in southern Sindh province, where Hussain has been held.

"We have to seek death warrants two weeks prior to hang any convict, so his hanging will take place after at least one month," Mangan told AFP.

An official in the federal ministry of interior also confirmed that a notification had been issued to halt executions during Ramadan, which starts this week.

The independent Human Rights Commission of Pakistan says the country has hanged over 150 convicts since restarting executions in December following a shocking Taliban school massacre; more than Saudi Arabia over the same period.

A moratorium on the death penalty had been in force since 2008, and its end angered rights activists and alarmed some foreign countries.

Amnesty International estimates that Pakistan has more than 8,000 prisoners on death row, many of whom have exhausted all avenues of appeal.

Critics say the country's criminal justice system is marred by police torture and poor legal representation, meaning many of those now facing the gallows have not had a fair trial.
Comments
RamadanNusrat ManganHuman Rights Commission of PakistanAmnesty InternationalShafqat HussainTaliban school massacrePakistan