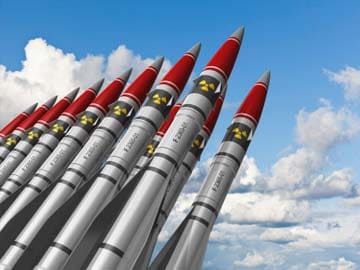 Islamabad/Washington: Pakistan is developing sea-based missiles and expanding its interest in tactical nuclear warheads to give it a "second-strike" capability if a catastrophic nuclear attack destroyed all its land-based weapons, according to a media report today.

The next step of Pakistan's strategy includes an effort to develop nuclear warheads suitable for deployment from the Indian Ocean, either from warships or from one of the country's five diesel-powered Navy submarines, The Washington Post reported quoting Pakistani and Western analysts.

In a sign of that ambition, Pakistan in 2012 created the Naval Strategic Force command, which is similar to the air force and army commands that oversee nuclear weapons.


"We are on our way, and my own hunch is within a year or so, we should be developing our second-strike capability," the paper quoted Shireen M. Mazari, a nuclear expert and the former director of the Institute of Strategic Studies Islamabad, a hawkish Pakistani government-funded think-tank.

Instead of working to enhance the range of its missiles, Pakistan is developing shorter-range cruise missiles that fly lower to the ground and can evade ballistic missile defences, analysts say.

Pakistan has repeatedly tested its indigenously produced, nuclear-capable, Babur cruise missile, which has a range of 640 km and can strike targets at land and sea, military officials said.

In 2011 and last year, Pakistan also tested a new tactical, nuclear-capable, battlefield missile that has a range of just 60 km.

"This is the miniaturisation of warheads," said Mansoor Ahmed, a strategic studies and nuclear expert at Quaid-i-Azam University in Islamabad.

The development of nuclear missiles that could be fired from a Navy ship or submarine would give Pakistan "second-strike" capability if a catastrophic nuclear exchange destroyed all land-based weapons, the report noted.

Pakistan's nuclear push comes amid heightened tension with US intelligence and congressional officials over the security of the country's nuclear weapons and materials, the Post said.

The paper had reported in September 2013 that US intelligence officials had increased surveillance of Pakistan in part because of concerns that nuclear materials could fall into the hands of terrorists.

Promoted
Listen to the latest songs, only on JioSaavn.com
State Department spokeswoman Jen Psaki, asked if the US was concerned about a sea-launched Pakistani weapon, said it was up to Pakistan to discuss its programmes and plans.

But, she said, "we continue to urge all nuclear-capable states to exercise restraint regarding nuclear and missile capabilities. We continue to encourage efforts to promote confidence-building and stability and discourage actions that might destabilise the region."