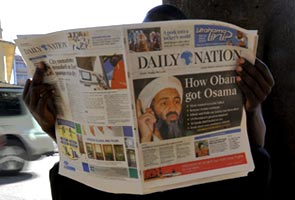 Islamabad: In an extension of its attempt to distance itself from the military operation that killed Osama bin Laden, the Pakistani government has issued a statement that "categorically denies the media reports suggesting that its leadership, civil as well as military, had any prior knowledge of the US operation against Osama bin Ladin carried out in the early hours of 2nd May 2011."

The government adds, "Reports about US helicopters taking off from Ghazi Airbase are absolutely false and incorrect. Neither any base or facility inside Pakistan was used by the US Forces, nor Pakistan Army provided any operational or logistic assistance to these operations conducted by the US Forces.  US helicopters entered Pakistani airspace making use of blind spots in the radar coverage due to hilly terrain." (Read Pakistan's official statement here)

Pakistan does take credit for providing crucial intelligence alerts to the US on the house in Abbottabad where the world's most-wanted man was killed in a three-storey house, far bigger than any other near it. "As far as the target compound is concerned, ISI had been sharing information with CIA and other friendly intelligence agencies since 2009. The intelligence flow indicating some foreigners in the surroundings of Abbottabad, continued till mid April 2011. It is important to highlight that taking advantage of much superior technological assets, CIA exploited the intelligence leads given by us to identify and reach Osama bin Ladin, a fact also acknowledged by the US President and Secretary of State, in their statements. It is also important to mention that CIA and some other friendly intelligence agencies have benefitted a great deal from the intelligence provided by ISI. ISI's own achievements against Al Qaeda and in War on Terror are more than any other intelligence agency in the World.

The statement also echoes former president Parvez Musharraf's claim that the US operation was a violation of Pakistan's sovereignty. "This event of unauthorized unilateral action cannot be taken as a rule. The Government of Pakistan further affirms that such an event shall not serve as a future precedent for any state, including the US. Such actions undermine cooperation and may also sometime constitute threat to international peace and security."

Promoted
Listen to the latest songs, only on JioSaavn.com
Pakistan also rebuts the criticism that given that there was a massive intelligence failure to identify the house where Osama lived, given that it had high security walls, and had no internet or phone connections.  Clues like its residents burning their trash, and the sheer size of the mansion, experts have said, should have prompted careful surveillance.  "There has been a lot of discussion about the nature of the targeted compound, particularly its high walls and its vicinity to the areas housing Pakistan Army elements. It needs to be appreciated that many houses occupied by the affectees of operations in FATA / KPK, have high boundary walls, in line with their culture of privacy and security. Houses with such layout and structural details are not a rarity."