The catastrophe happened due to climate change and lack of food, and has never been this big, said three researchers from the Norwegian Polar Institute. 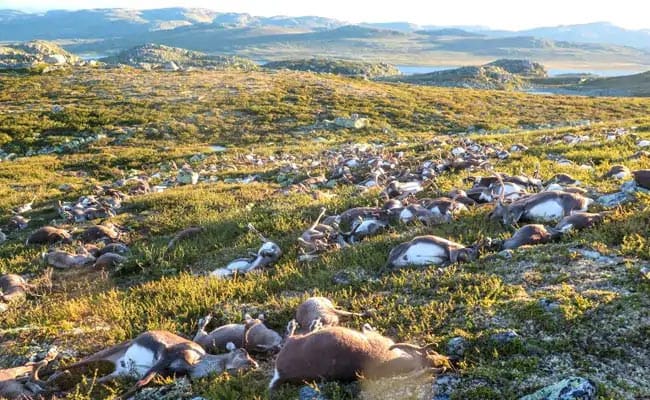 Reindeer is the largest herbivore in Arctic regions. (Reuters file photo for representation)

Researchers have found more than 200 reindeer that died of hunger on Norway's Arctic archipelago of Svalbard, public broadcaster NRK reported on Saturday.

The catastrophe happened due to climate change and lack of food, and has never been this big, said three researchers from the Norwegian Polar Institute.

The institute has mapped the wild reindeer stock on Svalbard for 40 years as it is a key species for understanding the tundra ecosystem, Xinhua news agency reported.

"It is scary to find so many dead animals. This is a terrifying example of how climate change affects nature. It is just sad," said researcher Ashild Onvik Pedersen.

According to her, heavy rainfall on Svalbard in December made it difficult for the animals to find food.

"The reindeer graze all over Svalbard, and in the winter they dig up food from the tundra. They can dig through snow, but not ice," Onvik Pedersen told NRK.

She believed that the dead reindeer were all examples of how a milder climate has a major impact on wildlife in areas far from civilization, although it is almost untouched by humans.

"Reindeer is the largest herbivore in Arctic regions. If it disappears and thus does not eat, tramples and fertilizers around, the landscape will look very different," he said.