The Sri Lankan government has started cleaning wells and other water sources which got contaminated by floodwater. 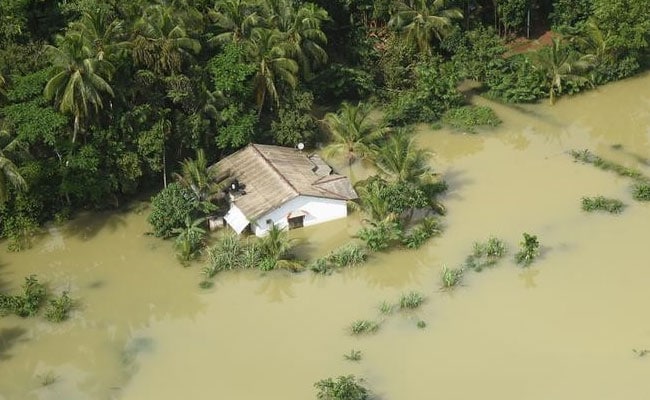 A house is submerged under floodwater at a village in Matara, Sri Lanka. (Reuters Photo)

Colombo: At least 202 have died in Sri Lanka's flood while 94 people are missing in the island nation's worst torrential rains since 2003 that displaced nearly half-a-million people. The Disaster Management Centre or DMC said at least over six lakh people are affected. The DMC said 1,505 houses were fully damaged and 7,617 houses were partially damaged due to floods and landslides.

Over 77,000 people have been displaced. "There was good news on the receding water levels in rivers during the past 24 hours due to low rainfall that ended at 3.30 pm," the Irrigation Department said.

Indian Navy vessel INS Shardul has 200 personnel on board, including specialised rescue, diving and medical teams, as well as a large amount of relief material and inflatable boats. INS Kirch was carrying 125 personnel with diving teams, relief supplies, inflatable boats and a mobile medical team.

The weather has begun to clear, and many of the over one lakh people evacuated over the weekend had returned to clear debris and mud from their waterlogged houses. More than 80,000 others remained in relief camps as their houses were swept away.

The two rivers overflowing led to the severe floods, particularly in southern Galle and Kalutara districts. The Sri Lankan government has started cleaning wells and other water sources which got contaminated by floodwater.

Mudslides have become common during Sri Lanka's summer monsoon as forests across the tropical Indian Ocean island nation have been cleared for export crop such as tea and rubber. A massive landslide a year ago killed over 100 people in central Sri Lanka.