"Only Chunks Of Remains": Why Divers Say Indonesia Plane Crash Is "Worst"

Indonesia has been the site of several air disasters over the past decade, and the 49-year-old has been involved in more than his fair share of undersea searches. 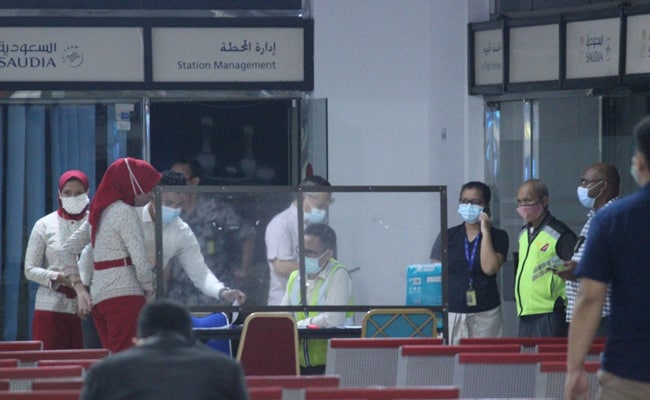 Indonesia has been the site of several air disasters over the past decade.

Bayu Wardoyo tends to skip the 6 a.m. breakfast of Indonesian fried rice served to divers on the ship searching for wreckage of the Sriwijaya Air passenger jet that crashed in the Java Sea on Jan. 9. He prefers coffee, light snacks and some fruit to prepare for the long day ahead.

Later in the morning, kitted out in a black wetsuit and weighed down by diving paraphernalia, he boards a speedboat and heads out under heavy monsoon clouds to the day's search area. Once there, Wardoyo attaches his scuba regulator and rolls overboard into waters filled with fresh tragedy.

Indonesia has been the site of several air disasters over the past decade, and the 49-year-old has been involved in more than his fair share of undersea searches. He worked on recovery efforts after an AirAsia jetliner carrying 162 people went down in the Java Sea in December 2014. Less than four years later, he returned to the same waters to hunt for wreckage and bodies in the wake of a Lion Air crash that claimed 189 lives. Now he's back there again, after Sriwijaya Air Flight 182 plunged into the ocean with 62 people on board. Among them were seven children and three infants.

He's never seen a crash as devastating as this.

"This Sriwijaya crash is the worst. The aircraft body is totally destroyed and scattered," Wardoyo said by text message. "We've only found small chunks of human remains. On the Lion Air crash we still found big pieces and the AirAsia crash we found almost a complete human body." 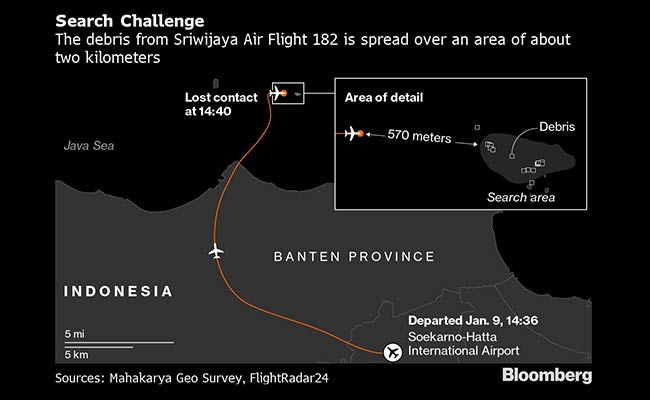 The debris from Sriwijaya Air Flight 182 is spread over an area of about two kilometers.

SJ182 plummeted close to 10,000 feet (3,050 meters) in 14 seconds shortly after takeoff from Jakarta on a stormy Saturday afternoon. Indonesia's National Transportation Safety Committee confirmed that the Boeing Co. 737-500's engines were running when the plane hit the sea at high speed, indicating the aircraft was in one piece upon impact. What triggered the violent dive remains a mystery.

One possibility investigators are looking into is the pilots losing control because a malfunctioning throttle was producing more thrust in one of the engines, according to a person familiar with the situation. The device had been having problems on previous flights, the person said.

With the search in its second week, hopes are fading that the cockpit voice recorder -- a crucial jigsaw piece in finding out what unfolded -- will ever be found. Divers retrieved the casing of the so-called black box on Friday, but the memory chip that records communication between pilots and ambient sound in the cockpit had broken loose.

The flight-data recorder was recovered last week and will provide clues as to whether this was a problem with the Boeing plane, pilot error, a freak weather occurance -- or something else entirely. But the investigation is hamstrung without the other black box. The locator beacons of both were dislodged when the plane smashed into the water, an impact so hard that according to Queensland-based air-safety specialist Geoffrey Dell, it would've been like hitting concrete.

Wardoyo said that with the AirAsia crash, "the aircraft body was still intact -- only broken into three pieces so we had to pull bodies from inside the aircraft."

"The Lion Air crash was different, the aircraft body disintegrated but we could still find big pieces of the fuselage. Sriwijaya is the worst," he said.

Indonesian authorities on Monday extended the search period, prolonging the divers' stay on the command vessel off the coast to Jakarta's north. Wardoyo is leading a group of 15 civilian professional divers with various qualifications such as deep-sea exploration and cave diving. One is a police officer and diving instructor. The team of volunteers is supporting specialist divers from the National Search and Rescue Agency, or Basarnas. He's not optimistic about recovering the rest of the voice recorder.

"Since the aircraft body is totally disintegrated to very small pieces and the sea floor is very thick mud, it would be very hard to collect anything after more than seven days," Wardoyo said. "It's almost impossible to find the memory or other piece of the recorder."

An official from Indonesia's NTSC said Tuesday that data from the cockpit voice recorder was needed to support findings from the flight-data analysis. Representatives from Boeing, the U.S. National Transportation Safety Board, the Federal Aviation Administration and General Electric Co. have traveled to Indonesia to help with the investigation. A preliminary report on the crash should be published in 30 days, local authorities said Tuesday.

Bad weather and high seas in Indonesia's monsoon season have hampered recovery efforts. "Big swells, high winds and rain wouldn't affect the divers below, but it makes it difficult for the surface team operating dinghies and rubber boats," Wardoyo said. "It also makes it harder for divers to transfer to the mother ship if the weather is bad."

The command vessel had to return to shore early Wednesday after it was damaged in a collision with another boat at about 1 a.m. in heavy swell and strong winds, according to Wardoyo. The divers returned to the crash site later that morning on a smaller boat.

While diving carries some risk regardless of the circumstances, it's amplified on a search mission, Wardoyo said. Shark attacks aren't an issue, but decompression sickness, drowning and even heart attacks from overexertion caused by lifting heavy pieces of wreckage in strong currents are among the dangers, he said.

"We don't and won't take credit for doing this, but at least we can help others with our expertise," Wardoyo said. "Anyone else would do the same."

Wardoyo, who lives with his wife in Jakarta, has been involved in the search since the day after the crash. At sea, the teams wake early, at around 5 a.m., and a briefing is held on the day's plans after breakfast. Wardoyo runs those meetings along with the commander of the Basarnas specialist diving team. Weather permitting, they head to the search area at 8 or 9 a.m. on rubber boats or rigid inflatables.

On good days, visibility underwater is three to five meters, but this week it dropped to one meter or less, Wardoyo said. In the aftermath of the crash, Indonesian officials briefed the media on the number of bags containing body parts and plane wreckage being brought ashore. Members of Wardoyo's team, in line with Basarnas protocol, wear surgical gloves underneath diving gloves for handling human remains.

"It's not nice for us, but we always think about the families who lost their loved ones," Wardoyo said. "It's not easy, we have to move inch by inch."