The Royal Caribbean-owned ship was docked in the capital of San Juan when the girl fell Sunday afternoon, according to the police report. 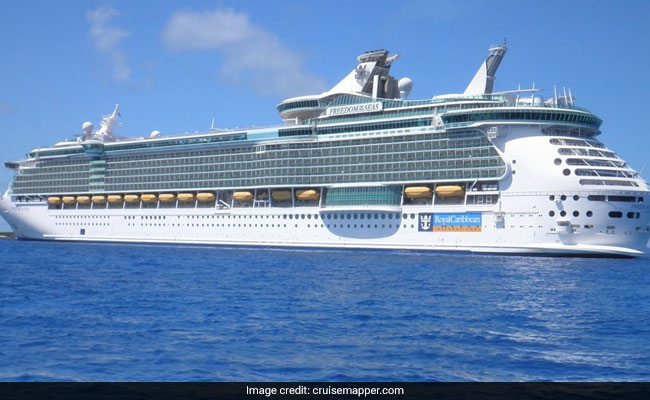 A Puerto Rican official said the child fell onto pavement at a dock.

The man said he was just playing with his one-year-old granddaughter when he held her at the open window of the cruise ship, officials said.

The girl slipped from his grasp, fell 11 stories onto the pavement and died on the scene, Puerto Rico Police Commissioner Henry Escalera Rivera told The Washington Post. The Royal Caribbean-owned ship was docked in the capital of San Juan when the girl fell Sunday afternoon, according to the police report.

The child was from Granger, Indiana, and traveling with her parents, two siblings and grandparents from both sides of her family, police told the Associated Press.

"They were enjoying a family vacation that, tragically, ended in such a sad incident," Rivera said.

Rivera, who identified the child as Kloe Wiegand and the grandfather as Salvatore Anello, said the entire family is distraught and remains in Puerto Rico to be interviewed later this week. They will stay until the investigation is finished, police said, according to the AP.

Anello, a resident of Valparaiso, Indiana, who is on the mother's side of the family, is being investigated, police sergeant Nelson Sotelo told the AP. The Post could not immediately reach Anello for comment.

The police department in South Bend, Indiana, said Monday that one of its officers, Alan Wiegand, is the girl's father. Rivera confirmed Wiegand's identity.

"The department asks the community to pray for the entire Wiegand family as they grieve and to respect their privacy," the department said in a statement posted online.

Speaking to local news station WSBT 22, South Bend police chief Scott Ruszkowski disputed earlier statements from a Puerto Rican public safety official that the girl had been held out from the window, and Rivera said only that the girl and Anello were at the opening in the ship.

Local Port Authority spokesman Jose Carmona told CNN that the grandfather sat the child in a window with an open pane in a dining hall. Carmona said the girl fell after the grandfather lost his balance.

Authorities are initially considering the death an accident, Carmona said.

The Post could not immediately reach Wiegand, and a spokesperson for the South Bend police department has not responded to The Post's inquiries. The Post was directed to the Puerto Rican tourism department and then back to the public safety department after contacting the Port Authority.

Homicide detectives were on the scene, and authorities are looking for camera footage, Puerto Rican Secretary of Public Safety Elmer Roman told Primera Hora, a Puerto Rican newspaper, in a video posted Sunday. Roman said at the time that the girl's family was at the doctor's office getting "spiritual, moral as well as psychological support."

Puerto Rican Secretary for Public Affairs Anthony Maceira Zayas tweeted Sunday to confirm reports of the girl's death and give his condolences.

"We pray to the Lord to fill this family with strength, who are experiencing a real tragedy today," he wrote in Spanish.

The Department of Public Safety also expressed its sadness over the incident in a Facebook post. It said that police and forensics staff, as well as several other governmental departments are working to address the situation.

Royal Caribbean, too, said it was "deeply saddened" by the incident and expressed sympathies to the family.

"We've made our Care Team available to assist the family with any resources they need," company spokesperson Owen Torres said in an email to The Washington Post. "Out of respect for their privacy, we do not plan to comment further on the incident."

Torres did not respond to questions about the company's safety protocols.

The ship, dubbed Freedom of the Seas, was set to leave Sunday evening with more than 3,600 passengers on a seven-day Eastern Caribbean trip from San Juan, according to the cruise site Seascanner. According to the AP, it had returned Sunday to the capital's Pan-American dock after another week-long trip.

The cruise ship was delayed as investigators interviewed passengers about the incident, Primera Hora reported. But the ship continued on its way later, Rivera told The Post. As of Monday, Freedom of the Seas was in Philipsburg on the Dutch side of the island of Saint Martin, according to Seascanner.

(Except for the headline, this story has not been edited by NDTV staff and is published from a syndicated feed.)
Comments
cruise ship windowgirl falls from cruise shipFreedom of the Seas