Eleven pairs of loafers were dangling over the New York City skyline. It was September of 1932, as the Great Depression was reaching its height. 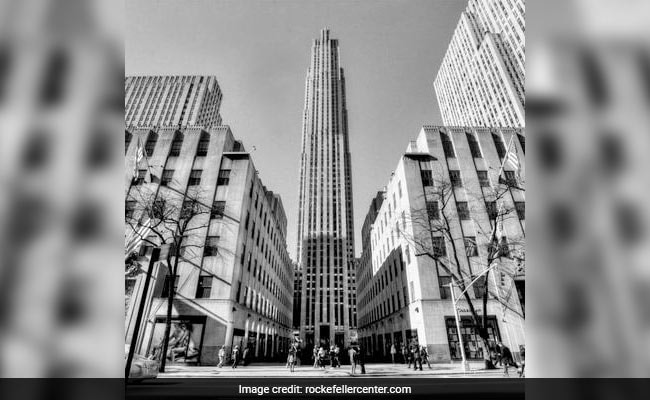 Eleven pairs of loafers were dangling over the New York City skyline. It was September of 1932, as the Great Depression was reaching its height. Unemployment and uncertainty could be felt throughout the city and the entire country. But on West 49th Street, a pillar of hope was under construction: the art deco skyscraper that would come to be known as 30 Rockefeller Plaza.

The ironworkers constructing its 70 floors were taking a break, sharing boxed lunches and cigarettes. They appeared to be completely unfazed by the location of this break: a narrow steel beam jutting out into the sky, hundreds of feet above the pavement.

As one coveralled man helped another light his smoke, someone snapped a picture. The resulting photograph became one of the most iconic images in the world, an embodiment of the spirit of the American worker. It still hangs in pubs, classrooms and union offices across the nation. Construction workers frequently re-create the 87-year-old photo. And every Labor Day, it is shared across social media, in tribute to those whose perspiration and determination built this country.

Photo buffs know the truth behind the classic photo: It was staged. The men in the picture were real ironworkers. They did build the structure that is now the 22nd tallest building in New York City and home to NBC studios. But rather than capture them in the midst of their lunch break, the photographer posed them on the beam for multiple takes - images that were intended as advertising for the new building. Some historians believe there was a sturdy level of the structure, then called the RCA building, just below the frame.

"You see the picture once, you never forget it," Rockefeller Center archivist Christine Roussel told Time magazine. But "the funniest part about the photographs," she said, "were they were done for publicity."

Other photos taken that day show the workers playing football, holding up American flags or pretending to sleep on the steel beam. It was the lunch photo that was published in the New York Herald Tribune that October, seven months before the building would open.

At the time, steel was an integral part of the American Dream. The industry was filled with recently arrived immigrant workers who withstood precarious working conditions to manufacture and construct the growing country.

"Cars, planes, ships, lawn mowers, office desks, bank vaults, swing sets ... to live in twentieth century America was to live in a world of steel," wrote historian Jim Rasenberger in his book on the alloy. "The steel frame made building construction more efficient and more economical, and it had a less pragmatic - yet more significant - effect.

"It gave humans the ability to rise as high as elevator and audacity could take them."

The audacity of the 11 men in the famous photo, dubbed "Lunch atop a Skyscraper," is evident. But to this day, their identities are almost entirely unknown.

When the New York Post asked "Have you seen these men?" in 2003, hundreds of people responded to the call out, certain that the workers in the photo were their relatives.

A similar declaration - "This is my dad on the far right and my uncle-in-law on the far left" - was written on a copy of the photo hung inside a pub in Galway, Ireland, where it captured the attention of Sean and Eamonn Ó Cualáin, brothers and documentary filmmakers. They wanted to find the man who wrote it, learn about his family and track down all the other men in the photo.

But despite their best efforts, their 2012 film "Men At Lunch" did not prove the man's assertions about his family. They could not verify the names of most the workers or the often-told claim that the man in the center with a cigarette in his mouth is Peter Rice, a Mohawk iron worker and one of the many North American Indians who built New York City's skyline.

With the help of Roussel, the brothers did track down two of the men in the photo: Joe Curtis, third from the right, and Joseph Eckner, third from the left. Little is known about either man.

The photographer behind the image is also a mystery. Though many mistake the picture to be one from Lewis Hine, known for his photos of the Empire State Building and Ellis Island, there were multiple photographers shooting at Rockefeller Center that day. No one is certain who can claim the famous image.

To Sergio Furnari, the mystery surrounding the faces only adds to the allure. Furnari is an artist who has been creating sculptures based on the photo since the 1990s.

"I had an instant connection because I'm from Sicily," Furnari told Our Town in 2017. "I saw a bunch of Sicilians sitting on that beam."

His sculptures were handheld-size until 2000, when he decided the image was so powerful, it deserved something bigger. He created a life-size replica, 40 feet in length. He finished it just after Sept. 11, 2001. The country, he could see, needed a boost, just like during the Depression.

Furnari mounted the sculpture, I-beam and all, onto a truck. He spent weeks driving it around New York City.

Eventually, it toured the country, while back in New York, Ground Zero became the foundation for One World Trade Center. Iron workers spent 11 years building the new structure until it was the tallest in America.

While their determination continued to inspire, much had changed since the famous photo was snapped, including safety regulations. When the workers took their lunch breaks, their boots were planted firmly on the ground.

(Except for the headline, this story has not been edited by NDTV staff and is published from a syndicated feed.)
Comments
Great DepressionNew York Cityunemployment