One 'Dreamer' To Donald Trump: Think Of Me As Your Daughter

Last September, Trump ordered an end to DACA, the Obama-era program that protected from deportation some 700,000 immigrants. 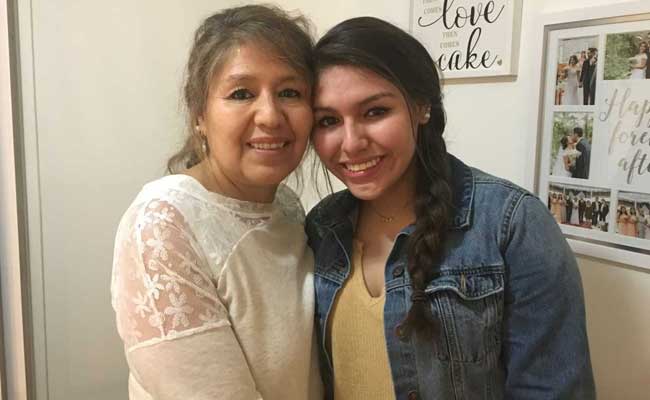 Annandale, United States: Nicolle Uria was 15 when her parents told her a shocking secret: she was an undocumented immigrant in the only country she has even known.

The teen, who was born in Bolivia, recalls that as her parents braced her two years ago for that gut-wrenching conversation, she expected something else to come out of their mouths.

"I immediately thought, 'I'm adopted', even though I look just like my sisters and my mom," Uria told AFP.

"The last thing on my mind was finding out that I was undocumented," said Uria, who is in her last year of high school in Annandale, Virginia outside Washington, and says she wants to study journalism in college.

Last September, her life was turned upside down when President Donald Trump ordered an end to Deferred Action for Childhood Arrivals (DACA), the Obama-era program that protected from
deportation some 700,000 immigrants brought to the US illegally as children, as she was.

Trump gave Congress six months to work out something for these so-called "Dreamers," most of them Latinos.

The program was supposed to end on March 5 but remains in force because of rulings from two federal judges suspending Trump's decision.

While the program works its way through court and lawmakers have failed to agree on the fate of the "Dreamers," Nicolle is terribly afraid of being separated from her parents, siblings and other family members.

"I would be going back to a country I don't even know," she said as she cried. "I have no memories of Bolivia."

Nicolle's parents brought her to America when she was a year old.

Ivan Uria, a former civil servant, and Giovanna Portugal, who studied to be an architect, worked in whatever they could find: cleaning homes or offices, at a gas station, looking after small children.
Their overriding goal was to get a good education for their three daughters. They always led Nicolle to believe she had been born in the United States.

"I did not want to break her heart telling her the truth," said Portugal.

One time, Portugal asked her daughter's Girl Scout leader to leave her out of a trip to the White House by telling her there was no room -- she could not bear to tell Nicolle she did not have the papers needed to get into the presidential mansion.
Portugal and her husband recently obtained residency papers after their elder daughters -- Ariana, 31, and, Lizzet, 29, both university graduates -- married US citizens.
But legalizing Nicolle's status is tricky, and they are acutely afraid of her being deported.
"I just don't want to go back because I'd feel that I wasted my parents' time. My parents have worked so much," Nicolle said.
She thought of her parents when she attended Trump's State of the Union speech at the invitation of a Democratic lawmaker, and once again heard the president speak of immigrants as if they were criminals.
"I would like him and the members of Congress to think of us as their kids. I know that they want the best for their kids. And we are here to give a better future to America," said Nicolle.

Once she knew the truth, Nicolle was not shy about telling the truth. But it was not easy.
Kids she thought were her friends treated her "in a different way," she said, adding: "That was a surprise."
On social media, she got threatening messages that told her to go home, or that immigration agents would be sent to her house, or that her parents should be arrested.

One teacher even told her he trusted Trump would build his promised wall on the border with Mexico. Uria said it was a joke but it still stung.

Nicolle's real friends say they could not be prouder of her and that she is the first "Dreamer" they have met.

"When she told me her story, it was the first time I heard about DACA," said Jessica Roop, who has played volleyball with Uria for the past four years.

Another classmate, Asael Saed, added: "Many Americans don't even know that their friends and their neighbors hold this stress inside."

Promoted
Listen to the latest songs, only on JioSaavn.com
Nicolle began to feel she was doing the right thing when kids at school who had grown up without papers would stop her in the hall and thank her.

"This country was made by immigrants. I've always felt American and I always will," she said.

Woman Who Flew Nearly 5,000 Kilometres To Meet Man She Met Online, Killed For Her Organs