One dead, 77 hurt in riot at Australian immigration detention centre 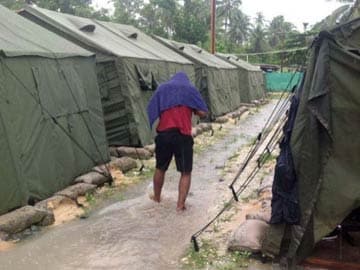 An undated photo obtained from the Refugee Action Coalition on February 18, 2014 shows a man walking between tents at Australia's regional processing centre

Sydney: One person was killed and 77 injured during a second night of rioting at an Australian immigration detention centre on Papua New Guinea's Manus Island, officials said on Tuesday.

Thirty-five asylum-seekers broke out of the same facility on Sunday evening, with several hurt, as tensions escalate about their fate under the Australian government's hardline policies.

Immigration Minister Scott Morrison revealed there had been a rolling series of largely peaceful protests, starting a few weeks ago, that culminated in the violence of the last two nights.

"The news of a death is a great tragedy," he said, adding that the man died from a head injury en route to hospital.

"This is a tragedy but this was a very dangerous situation where people decided to protest in a very violent way and to take themselves outside the centre and place themselves at great risk."

Of the 77 injured, 13 are in serious condition, including one with a fractured skull and another suffering gunshot wounds to the buttock. They are both due to be evacuated to Australia for treatment.

Manus Island is one of two remote Pacific camps used by Canberra in its punitive off-shore detention policy.

Under the scheme, aimed at deterring people-smugglers, any asylum-seeker arriving by boat or intercepted at sea is transferred to Manus or Nauru for processing and permanent resettlement outside Australia.

Morrison said that despite the unrest, the immigration centre had not been destroyed, with most of the injuries happening after the asylum-seekers "breached internal and external perimeter fences". He said it was possible some were still missing.

'Fled for their lives'

Ian Rintoul from the Refugee Action Coalition said tension with groups of locals, who oppose the camp, had been building throughout the day and the attacks began after power was cut to the detention centre.

He claimed the perimeter fences were breached, after staff were evacuated, by locals armed with machetes, pipes, sticks and stones who carried out "savage attacks".

"If there are asylum seekers outside the perimeter fence it's because they've fled for their lives late last night from those attacks," Rintoul told ABC television.

"It must be clear now that asylum-seekers cannot live safely on Manus Island. They should never have been taken there. Asylum-seekers must be brought to Australia," he added.

Morrison said it was too early to say exactly what happened, but denied PNG police were involved.

"There are all sorts of rumours that are put around in this environment," he said.

"We don't know what occurred outside the centre and that obviously will be the subject of an investigation into that person's death."

The riots follow a tense meeting between detainees and officials from Papua New Guinea's immigration and citizenship authority (ISCA) to discuss their fate if they were found to have a genuine refugee claim.

They were informed they would be resettled in PNG and "a third country option will not be offered".

"They will have frustrations about being in a centre they don't wish to be in because they wanted a very different outcome than being in either Manus Island or Nauru," Morrison said.

Promoted
Listen to the latest songs, only on JioSaavn.com
"There will be those who will seek to take down our policies, to take down our processing centres, to try and destroy the regime we have put in place."

The United Nations refugee agency has condemned the Manus and Nauru camps as "harsh" facilities that "impact very profoundly on the men, women and children housed there".