The blast occurred around 3 am at Taiwan-based Ming Dih Chemical Co., located on the outskirts of Bangkok near Suvarnabhumi airport. 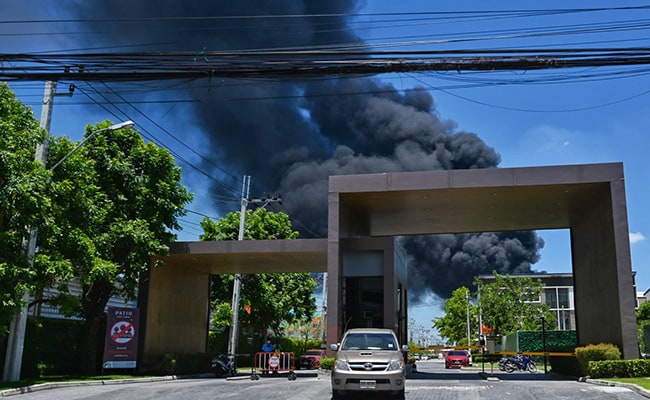 The public have been ordered to stay away from a radius of at least 500 metres around the blast site.

An explosion near Bangkok's international airport Monday left a plastics factory in flames, killing at least one firefighter and wounding 33 people as rescue workers struggled to extinguish the blaze hours later.

Heavy plumes of black smoke could be seen rising to the sky from the city's downtown 35 kilometres (21 miles) away, and by early evening the dark clouds had shrouded the Thai capital.

The blast occurred around 3 am at Taiwan-owned Ming Dih Chemical Co., located on the outskirts of Bangkok near Suvarnabhumi Airport in Samut Prakan province.

The cause of the explosion is still unknown.

By nightfall, more than 1,800 people had been evacuated, according to officials. At makeshift shelters, including a nearby school about nine kilometres away, elderly people in wheelchairs and families carrying masked babies waited to return home.

But by 8 pm, more than 17 hours after the explosion, the fire was still raging, with rolling balls of flames unquelled by the continuous spray of water cannon from fire trucks.

Helicopters had also dumped flame suppression foam onto the factory site, to no avail.

"We are now able to limit the fire area," said Wanchai Kongkasem, the governor of Samut Prakan province. "Though it is getting dark, we will continue to work as we want to finish putting it out as soon as possible."

"We are confident we can make it," he said.

Rescue workers drove around surrounding neighbourhoods in emergency vans, telling people via loudspeakers to leave for their safety.

Some, fearful of another explosion, had already packed their belongings in backpacks and waited outside their homes to be picked up by organised vans.

The public has been ordered to stay at least 500 metres away from the blast site, said Lieutenant General Ampon Buarubporn.

Though he added that "we do not know if there is anything left to explode".

In a statement posted on his Facebook, Premier Prayut Chan-O-Cha praised the rescue workers, volunteers and officials toiling to put out the fire.

"I would like to send my condolences to the family of the dead and honour the volunteers and officials who take all risks in preventing danger to others in this accident," he said.

According to officials, Ming Dih Chemical Co. produces expanded polystyrene -- colloquially known as styrofoam -- and has been in operation since 1985 in Bang Pli district.

Besides being the site of Suvarnabhumi Airport, the five-kilometre radius around the factory is also home to about 300 factories and residential neighbourhoods housing 240 communities.

Throughout the day, the changing direction of the wind shifted jet-black fumes across Bangkok, sending dark plumes of smoke twisting between its skyscrapers.

"We have sent air quality vehicles to check the air around the area and will work together with the pollution control department," said Industrial Minister Suriya Juangroongruangkit.

Multiple fire trucks, water trucks and two helicopters were deployed to quell the blaze, which left a wreckage of debris and gnarled metal beams.

"We are supporting the operation with our full capacity so the situation will be in control as soon as possible."

Traffic around the area was thrown into chaos as authorities closed a main road running parallel to the airport, while strong fumes of burning plastic permeated the area.

Thitipong Choke-umnuay, whose workplace is about 10 kilometres away from the factory and escaped the impact, said his family members living closer were not so lucky.

His aunt had evacuated to his office after the impact of the explosion caused severe damage to her home.

"Today she will move to my house in Lat Phrao (in central Bangkok) because she can't live at her house," the customs clearance agent told AFP.

"It's a chemical explosion so there are strong smells."