On Miami Beach, The Party's Over Amid Coronavirus Fear - Almost

The "Spring Break" held by US colleges and universities is peak season for Miami Beach, an island city off the coast of Miami with enticing sand 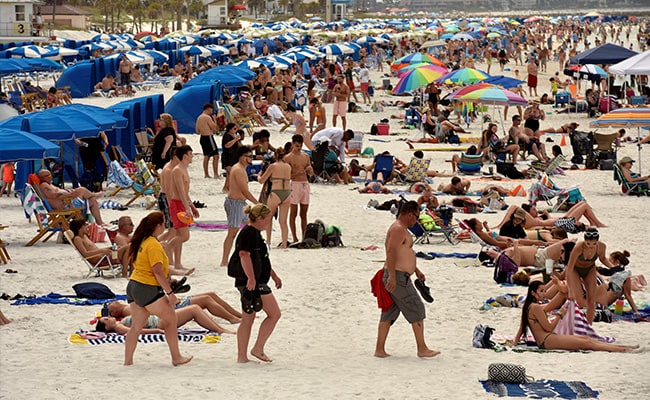 Coronavirus: Under Florida sunshine, the area at Miami Beach must now close at dusk

They crowded beaches and crammed nightclubs -- US students with more affinity for Corona beer than coronavirus, and who for days ignored recommendations to keep their distance from each other as a precaution against the pandemic.

But on Wednesday, some had begun to face reality.

The "Spring Break" held by US colleges and universities is peak season for Miami Beach, an island city off the coast of Miami with enticing sand along a neon-lit strip of restaurants, nightclubs and bars.

Elsewhere in the United States cities became dead zones this week, with big-league sports and other events canceled, bars and restaurants shut and workers staying home to avoid spreading the deadly COVID-19 illness which has infected more than 7,700 people and killed more than 110 including seven in Florida.

Under the Florida sunshine, though, beaches have still been full of swimmers and sunbathers, especially at Miami Beach even though the area must now close at dusk.

He warned them they could be putting other people at risk of becoming infected with the contagious and deadly virus.

"We don't want them gathering," he said. "And I see they do gather, including on beaches and including in restaurants."

- 'Not invincible' -
In response to the virus's spread, Miami-Dade County and the city of Miami Beach took measures -- not always successful -- to put this year's party season to an end.

"You're not invincible," Miami Beach Mayor Dan Gelber said on Tuesday. "And you've got to think about the person next to you and even the person you don't know."

"You got to stop this kind of activity right now," he told the "kids" visiting his city.

"It's not fun and it has devastating consequences."

Miami ordered bars, nightclubs and gyms to close their doors from 11:00 pm Tuesday until further notice, with restaurants only able to sell food for take-out.

Groups of more than 10 people are banned from the area's parks and beaches -- but in nearby South Beach on Wednesday, no one seemed to be heeding those instructions.

Shelly Hill, a frustrated 21-year-old student who lives in neighboring Georgia, stood on a street corner with five friends, trying to figure out what to do.

"A lot of stuff is getting shut down," Hill told AFP.

"At the same time, people need to be safe and quarantine, because it is spreading really fast. So, I don't really know," Hill said. "I have a lot of mixed emotions about how I feel"

The group decided to go home.

Between Tuesday and Wednesday, some beachside establishments decided to close entirely.

Even if waiters and other workers still get paid for their regular shifts, many of them will miss the tips they often rely on in a country where the custom is to leave 18-20 percent on a restaurant bill.

Pizzeria worker Arquimedes Blandone sat outside the restaurant on one of the busiest streets in South Beach, bored and smoking a cigarette.

There isn't much for him to do now.

"Everything is very serious," the 33-year-old said. "This is the worst day we've had since we opened a year ago."

The restaurant usually closes at 3:00 am, providing pizza for drunken partygoers milling around Miami Beach late at night.

But now they will have to shut at 10:00 pm after a distressingly slow day.