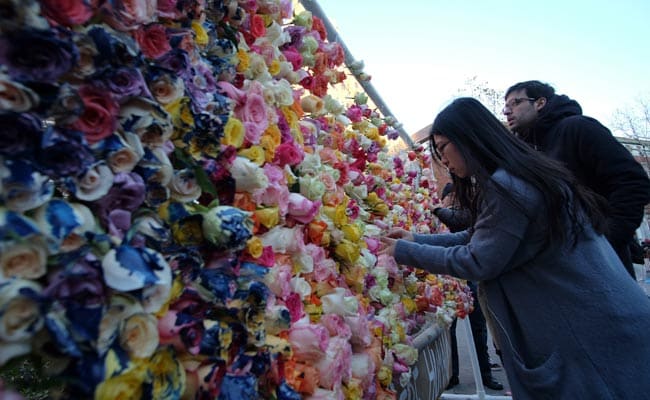 A woman places a rose at a makeshift memorial during a vigil to show solidarity with the citizens of France on November 14, 2015 in New York, a day after Paris terrorist attacks. (AFP)

Courcouronnes, France: The French police zeroed on one of the attackers - Omar Ismail Mostefai -- from one of his severed fingers found at the Bataclan hall, where the worst of Friday's carnage in Paris took place.

Mostefai, the police said, was one of the three gunmen who had mowed down 89 people. He blew himself up during the attack, but the print of one of his fingers matched the police records.

Mostefai, 29, was a petty criminal, the French police said -- his criminal record shows eight convictions for petty crimes between 2004 and 2010, but no jail time.

Paris prosecutor Francois Molins said Mostefai had been singled out as a high-priority target for radicalisation in 2010 but, before Friday, he had "never been implicated in an investigation or a terrorist association".

Investigators are now probing whether he took a trip to Syria last year, according to police sources.

The killer's father and 34-year-old brother were placed in custody on Saturday evening and their homes were searched.

"It's a crazy thing, it's madness," his brother told AFP, his voice trembling, before he has taken into custody.

"Yesterday I was in Paris and I saw how this shit went down."

The brother, one of four boys in the family along with two sisters, turned himself in to police after learning Mostefai was involved in the attacks.

While he had cut ties with Mostefai several years ago, and knew he had been involved in petty crimes, his brother said he had never imagined his brother could be radicalised.

The last he knew, Mostefai had gone to Algeria with his family and his "little girl," he said, adding: "It's been a time since I have had any news."

"I called my mother, she didn't seem to know anything," he said on Saturday.

A source close to the enquiry said Mostefai regularly attended the mosque in Luce, close to Chartres, to the southwest of Paris.