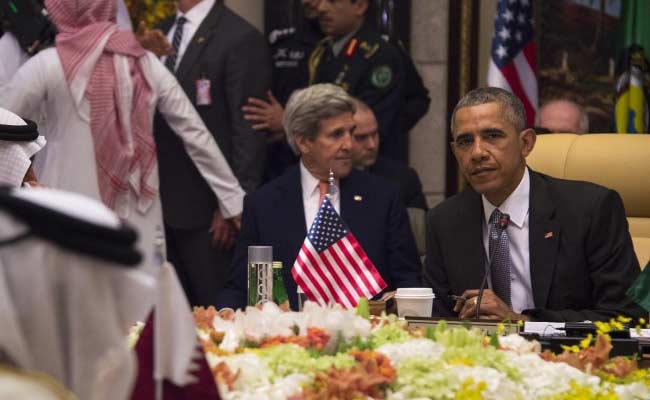 Riyadh: US President Barack Obama and Gulf Arab leaders started talks in Riyadh today at a summit aimed at forging joint action on perceived security threats from Iran and Islamic State, and at ironing out strains in their old alliance.

Obama, who arrived on Wednesday, hopes to allay Gulf countries' fears over Iranian influence and encourage them to douse sectarian tensions in an effort to confront the threat posed by jihadist militants like Islamic State.

Those issues were addressed in his bilateral talks on Wednesday with leaders from Saudi Arabia and the United Arab Emirates, and will dominate again in the summit which includes the other Gulf Cooperation Council (GCC) members.

Years of frustration among Gulf countries, aggravated by more recent stumbles, may make Saudi Arabia and its regional allies less receptive to Obama on his fourth and most probably final trip to the kingdom.

The Middle East is mired in a contest for influence between a bloc of mostly Sunni countries, including the conservative, pro-Western Gulf monarchies, and revolutionary Shi'ite Iran and its allies.

Most of the GCC states, which also include Kuwait, Qatar, Bahrain and Oman, have been bitterly disappointed in Obama's presidency, during which they believe the United States has pulled back from the region, giving more space to Iran.

They were also upset by Obama's remarks in a magazine interview that appeared to cast them as "free-riders" in US security efforts and urged them to "share" the region with Tehran.

For his part, the American president has said he wants Gulf allies to offer more democratic reforms and improve human rights, which he discussed with Saudi King Salman on Wednesday.

Adding to tensions is a bill proposed in US Congress to lift Riyadh's immunity if any Saudi officials are found to have been involved in the September 11, 2001, attacks.

The United States remains deeply enmeshed in Gulf security, however, cooperating closely with the monarchies to strengthen their armed forces and share intelligence aimed at countering Islamist militant groups.

That underlying strong relationship was underscored in a cartoon published on Thursday in the pan-Arab daily Asharq al-Awsat, owned by King Salman's branch of the Al Saud ruling family.

It showed a Shi'ite cleric in black turban and robes sweating with alarm as he read a newspaper headlined "Obama in Riyadh". All the Saudi newspapers published several pages of photographs of Obama's meetings with Salman and other princes.

Obama and the Gulf leaders joined for a photograph at the Diriyah Palace on the outskirts of Riyadh before starting the talks. The American president is expected to make a statement afterwards, before departing for London.

The region's crises, including civil wars in Syria, Yemen and Iraq in which the US and Gulf states have cooperated but still disagree on some issues, will be important areas of discussion.
© Thomson Reuters 2016