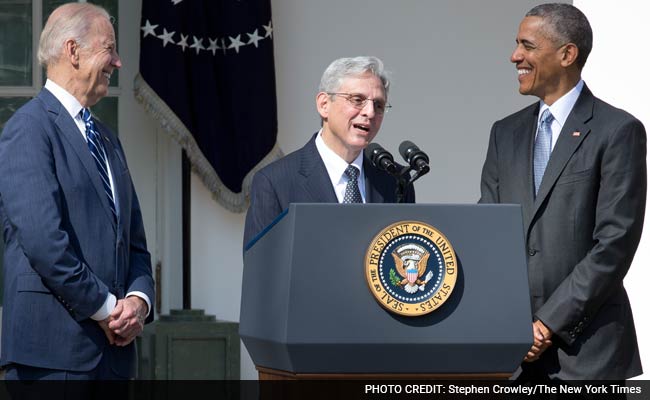 WASHINGTON: President Barack Obama on Wednesday nominated Merrick B. Garland to be the nation's 113th Supreme Court justice, choosing a centrist appellate judge who could reshape the court for a generation and become the face of a bitter election-year confirmation struggle.

In selecting Garland, 63, a well-known figure in Washington legal circles who has drawn praise from members of both parties, Obama dared Republican senators to ignore public pressure and make good on their promise to block consideration of any nominee until after the next president is chosen.

The nomination to fill the seat on the court created by the death of Justice Antonin Scalia sets in motion a standoff that is likely to play out for many months, perhaps without resolution. Its outcome could tip the ideological balance of the nation's highest court, and an array of well-financed interest groups on both sides has already assembled for the battle over the nomination.

"I've selected a nominee who is widely recognized not only as one of America's sharpest legal minds, but someone who brings to his work a spirit of decency, modesty, integrity, even-handedness, and excellence," Obama said in a formal Rose Garden ceremony announcing his selection, where the president was flanked by Garland and Vice President Joe Biden. "Presidents do not stop working in the final year of their term; neither should a senator."

Republicans quickly rejected Obama's challenge. Sen. Mitch McConnell of Kentucky, the majority leader, appeared on the Senate floor shortly after the president's remarks to declare an end to Garland's nomination, no matter his qualifications. In case there was any doubt, McConnell later called Garland personally to say he would not be receiving him in his Capitol office, nor taking any action on his nomination.

"The American people may well elect a president who decides to nominate Judge Garland for Senate consideration," McConnell said on the Senate floor. "The next president may also nominate someone very different. Either way, our view is this: Give the people a voice in the filling of this vacancy."

In choosing Garland, a former prosecutor who has served on the Court of Appeals for the District of Columbia Circuit since 1997 and as its chief judge since 2013, Obama opted to select a jurist better known for his meticulous work ethic and adherence to legal principles than for an ideological bent.

"At a time when our politics are so polarized, at a time when norms and customs of political rhetoric and courtesy and comity are so often treated like they're disposable, this is precisely the time when we should play it straight," Obama told an audience that included Garland's family, Democratic senators and liberal activists.

White House officials considered, and rejected, advice from supporters who urged Obama to pressure Republicans by nominating a member of a racial minority. They also declined to zero in on a liberal champion who might have excited the core Democratic supporters that Hillary Clinton or Bernie Sanders would need in the general election.

Some liberals expressed dismay with that decision. Charles Chamberlain, executive director of Democracy in America, said it was "deeply disappointing that President Obama failed to use this opportunity to add the voice of another progressive woman of color to the Supreme Court, and instead put forward a nominee seemingly designed to appease intransigent Republicans."

But White House officials said Obama and his aides made the calculation that focusing on finding a nominee with impeccable legal credentials would expose the Republican opposition as based solely on politics. The president passed over two other federal appellate judges on his short list who might have achieved those goals: Sri Srinivasan, 49, of Indian descent, and Paul Watford, 48, an African-American who is viewed as more liberal than Garland.

"To suggest that someone as qualified and respected as Merrick Garland doesn't even deserve a hearing, let alone an up-or-down vote, to join an institution as important as our Supreme Court, when two-thirds of Americans believe otherwise - that would be unprecedented," the president said.

Obama had twice considered Garland for the Supreme Court during his first term, and some aides viewed him at the time as an "in-case-of-emergency-break-glass" candidate whom they should save for a future vacancy where they needed a nominee who was broadly acceptable to Republicans. That future appears to have arrived.

A few Senate Republicans have suggested recently that if Clinton is elected in November, they might be more open to considering Garland as an alternative to a more liberal nominee. And as Garland prepared to begin meeting with senators on Thursday, there was early evidence that at least some Republican senators were softening their stances.

A White House statement said that Sen. Chuck E. Grassley, R-Iowa, the chairman of the Judiciary Committee, had agreed to meet with Garland, but that the meeting would be scheduled after the two-week congressional recess ended. Sens. Mark Kirk of Illinois and Kelly Ayotte of New Hampshire, both facing steep re-election challenges in Democratic-leaning states, said they would meet with Garland.

Sens. Susan M. Collins and Jeff Flake of Arizona, both Republicans, have also said they would sit down with Obama's nominee. And Sen. Orrin G. Hatch, R-Utah, a member of the Judiciary Committee, said he would be open to holding hearings on Garland during a lame-duck congressional session after the election.

The White House reached out to Garland, along with a number of other potential nominees, days after Scalia's death Feb. 13. Obama interviewed him last Thursday even as the president's short list, which included his name and those of Srinivasan and Watford, leaked in the news media, alarming the West Wing officials who were trying to keep the process out of the spotlight.

Obama spent Friday and Saturday in Texas, attending the South by Southwest festival and Democratic fundraisers before playing a round of golf. He returned to Washington late Saturday night and informed his top aides soon afterward that Garland would be his pick.

Denis McDonough, the president's chief of staff, was one of only about a half-dozen top aides who knew the choice as planning for the public rollout of the nominee kicked into gear. Much of the work could be prepared without knowing the specific nominee, but on Tuesday night, White House videographers recorded Garland for the gauzy biographical video that they released Wednesday morning.

It came out just after Obama appeared under a sunny sky at the Rose Garden to introduce Garland and urge Republicans to give him a chance.

"I simply ask Republicans in the Senate to give him a fair hearing, and then an up-or-down vote," Obama said. "If you don't, then it will not only be an abdication of the Senate's constitutional duty, it will indicate a process for nominating and confirming judges that is beyond repair."

Garland's professional life was shaped in part by the bombing of the Alfred P. Murrah Federal Building in Oklahoma City in 1995, which killed 168 people. As a Justice Department official in the Clinton administration, he coordinated the government's response, starting the case against the two men charged, Timothy McVeigh and Terry Nichols, and eventually supervising their prosecution. McVeigh was executed.

Garland insisted on going to the scene even as bodies were being pulled from the rubble, friends said. His role captivated Obama, said Valerie Jarrett, the president's senior adviser, who added that it "struck the president because it reflects on the chief judge's character."

In his brief remarks, Garland emotionally described his career as a prosecutor and a judge, saying that "fidelity to the Constitution and the law have been the cornerstone of my professional life." He said that if the Senate confirmed him, he promised to "continue on that course."

The scene captured an extraordinary moment of uncertainty for Garland, twice passed over for the Supreme Court and now facing a path to confirmation that is, at best, ambiguous - and could be a dead end entirely.

Sen. Amy Klobuchar, D-Minn., a member of the Judiciary panel who attended the ceremony, said that may have helped move Garland to the verge of tears during his comments.

"This is about how this burden of standing up for an independent judiciary - even if you may never get confirmed - is so important in this incredibly polarized time," Klobuchar said in an interview.

She said many Republicans who had opposed Obama's earlier, successfully confirmed Supreme Court nominees, Elena Kagan and Sonia Sotomayor, had told her during those proceedings that they would have supported the president if he had selected Garland instead.

"It's kind of hard to get away from the fact that he, in the past and now, has been viewed as a consensus person," Klobuchar added.
© 2016, The New York Times News Service

(This story has not been edited by NDTV staff and is auto-generated from a syndicated feed.)
Comments
Barack ObamaMerrick B. GarlandUS Supreme Court JudgeUS Supreme CourtRepublicansDemocrats