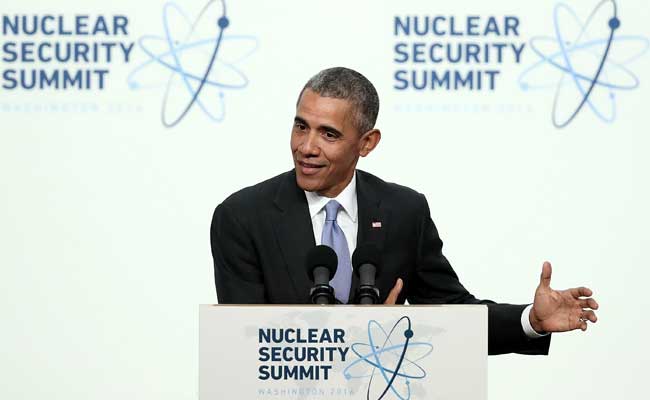 US President Barack Obama speaks during a press conference at the conclusion of the Nuclear Security Summit April 1, 2016 in Washington, DC. (AFP Photo)

Washington: Just a day after the show of solidarity with India's Prime Minister at the White House Dinner, US President Barack Obama said India and Pakistan both need to reduce the subcontinent's serious nuclear threat.

At the Nuclear Security Summit in Washington, President Obama said "we need to see progress in Pakistan and India" and "make sure that as they develop military doctrines that they are not continually moving in the wrong direction."

Mr Obama expressed serious concerns about "nuclear arsenals" expanding in some countries, "especially those with small tactical nuclear weapons that could be at greater risk of theft."

His remarks are being seen as a direct reference to Pakistan, which has been aggressively accumulating small, tactical nuclear weapons ostensibly as what it sees as a defence to India's Cold Start doctrine. The Obama administration and the larger international community however clearly see these weapons as highly vulnerable to theft from terrorist networks such as ISIS.

Sources have told NDTV that the hypothetical case of terrorist theft was discussed by world leaders at the Nuclear Security Summit in the afternoon session. The session focused on the global response to a terrorist getting access to Pakistan's tactical nuclear weapons, through a breach in security protocols or compromise. Pakistan, however, has not agreed to reduce its tactical nuclear weapon arsenal and maintains its security procedures are adequate.

NDTV has learnt that the Pakistani delegation, represented by Foreign Affairs Advisor Tariq Fatemi, wanted to meet the Indian delegation but decided to call off the effort to reach out after PM Modi's strong interventions against Pakistan's policy of "selective terrorism" at the White House dinner on March 31.

The US President made the remarks during a press conference at the conclusion of the two day Nuclear Security Summit in Washington, attended by more than 50 global leaders.