Number Of Deaths In Indonesia Earthquake, Tsunami Rises To 1,944

The quakes and tsunami have forced a total of 62,359 Indonesians to flee their homes and take shelter in makeshift tents and under tarpaulins. 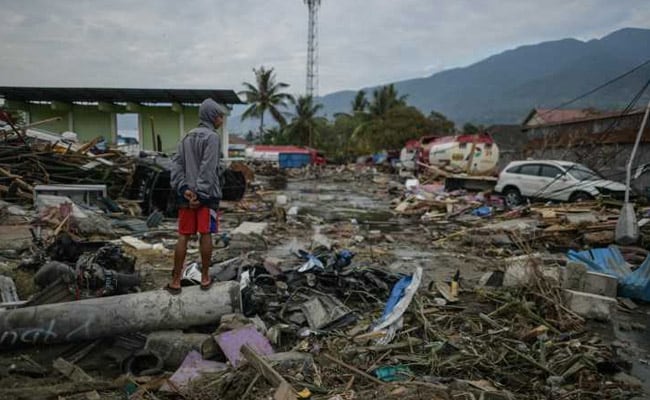 The earthquakes and tsunami hit Indonesia on September 28. (File)

The number of deaths from multiple strong earthquakes and a tsunami in Indonesia's central Sulawesi province jumped to 1,944 today, military and disaster agency officials said.

A spokesman for the Joint Task Force for Central Sulawesi province said a total of 2,549 people were still in hospitals for medical treatment after the disasters hit the province on September 28, reports Xinhua news agency.

The number of people who were missing or believed to be buried under the debris were 683 and 152 respectively, he said.

The National Disaster Management Agency said most bodies were retrieved from Palu, the provincial capital, followed by the districts of Donggala, Sigi, Parigi Mountong and a district of Pasang Kayu in nearby West Sulawesi province.

"The search for the victims is expected to be completed on Thursday," an official said.

The quakes and tsunami have forced a total of 62,359 Indonesians to flee their homes and take shelter in makeshift tents and under tarpaulins at 147 evacuation centres, he added.

Powerful and shallow quakes of 6.0, 7.4 and 6.1 magnitude that triggered a tsunami devastated the province on September 28, with the hardest-hit area in Palu and adjoining Donggala district.

The tsunami, which followed the quakes with the height of 0.5 to 3 meters, ravaged coastal areas near the Talisa beach in Palu and Donggala district, according to the meteorology and geophysics agency.