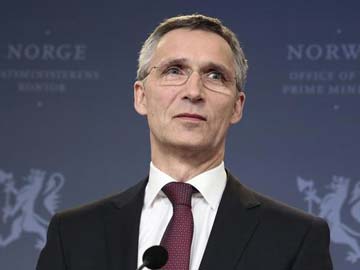 Former Norwegian prime minister Jens Stoltenberg pauses during an address to the media in Oslo.

Oslo: From his youth as an anti-war activist who hurled stones at the U.S. Embassy to his later years as Norway's leading statesman and negotiator, Jens Stoltenberg will take over the reins of NATO with honed skills in both confrontation and compromise.

The former prime minister and U.N. climate change envoy will assume the role of North Atlantic Treaty Organisation secretary general from October 1 at a delicate time for the security group over Russia's annexation of Ukraine's Crimea region.

"If the task for NATO now is to defuse the crisis with Russia over Ukraine, then Stoltenberg will be eminent. He thrives on compromise. If the task is escalation, he won't be bad, but there are others who could do a better job," said Frank Aarebrot, professor of comparative politics at the University of Bergen and an acquaintance of Stoltenberg.

"He has a strong presence, in the Bill Clinton sort of way. When he's talking to you, you feel like the most important person in the world," Aarebrot said.

The son of a former defence and foreign minister, Stoltenberg, 55, negotiated a deal with Russia that ended a four-decade dispute over their Arctic maritime borders and built a personal friendship with then-president Dmitry Medvedev.

He has made it clear that the annexation of Crimea by Vladimir Putin's Russia, which has raised the need for NATO to boost its presence on Europe's eastern edge, cannot stand.

"Russia's use of military force to modify its borders is unacceptable," Stoltenberg said. "The conflict in Ukraine must be a political solution... We will not live in a world where the strongest one prevails."

"Russia's move is in breach of international law and it's a type of power policy that belongs in a past era."

Stoltenberg, who lived several years as a child in Belgrade where he learned to speak Serbian, served 22 years in parliament and was prime minister from 2005 to 2013 at the head of a Labour Party-led coalition.

"His strength is that he's got a vast political network and good political intuition... and he will also listen to civil society, not just people within the 'security cage'," said Jan Egeland, a former U.N. Under-Secretary General.

He stood up to China when it reacted with fury to the Norwegian Nobel Committee's decision to award the 2010 Peace Prize to dissident Liu Xiaobo, saying it amounted to interference in its internal affairs.

Stoltenberg persisted in supporting the committee despite Beijing's threats about the consequences, and relations between the two nations have been essentially frozen since, with some Norwegian firms, such as energy group Statoil, essentially shut out from the country.

He also pushed his government to mediate, often in secret, to resolve some of the world's longest conflicts, hoping Nordic patience and long history of mediation would bear fruit.

Norway's diplomats helped bring Colombia's government and Marxist FARC rebels to the negotiating table in 2012 and mediated between the Taliban and the West, once even bringing Taliban leaders to Oslo to engage them on democratic rule.

"He's respected across party lines and political lines and he's a good listener who will take in an enormous amount of information from various sources and put into policy," said Egeland, now the head of the Norwegian Refugee Council.

A cross-country skiing fan often seen on the trails around Oslo, Stoltenberg started in politics early and admitted to having thrown rocks at the U.S. embassy as a teenager in the 1970s, protesting against the Vietnam war.

When he took over leading the Labour Party's youth wing in 1985, he initially affirmed the platform's position that Norway's should leave NATO but eventually pushed the group to reverse its position.

He served both as finance and trade minister in the 1990s, advocating that Norway should save up its oil wealth for a rainy day, and during the global financial crisis, he used the saved up cash to spend the country out of the crisis, helping the economy escape relatively unharmed.

As prime minister, he also backed NATO's military campaigns in Afghanistan and Libya, and his government was also an unwavering supporter of Lockheed Martin Corp <LMT.N> Joint Strike Fighter programme, despite delays and a cost blowout.

Promoted
Listen to the latest songs, only on JioSaavn.com
Many people outside Norway know him best for consoling his nation and advising against hate-driven reactions after far-right gunman Anders Behring Breivik killed 77 people, mostly teenagers, over Labour's support for immigration in 2011.