North Korea tells UN to mind its own business 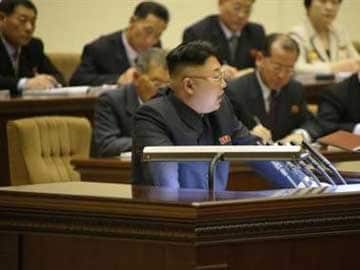 Geneva: "Mind your own business," North Korea's ambassador told the UN Human Rights Council on Friday, moments before it voted to demand justice for Nazi-style atrocities in his country.

The United Nations Human Rights Council in Geneva adopted a resolution, brought by Japan and the European Union and backed by the United States and South Korea, calling for the U.N. Security Council to seek accountability for those responsible.

Thirty states voted in favour, six including China and Russia were against, with 11 abstaining. North Korea, also known as the Democratic People's Republic of Korea (DPRK), has observer status with no vote.

U.S. deputy assistant secretary of state Paula Schriefer interrupted North Korean Ambassador So Se Pyong three times, demanding he answer the allegations rather than criticising the records of other countries.

"In the DPRK, we have a proverb saying 'Mind your own business'," So said, prompting a loud laugh in the hall, "which means that one needs to see his or her face in the mirror to check how nasty it is before talking about the others."

"No person on earth would be so stupid as to keep the door open to a gangster who is attacking with a sword and even cooperate with him. Cooperation can never be compatible with confrontation," So said.

The resolution recommends "that the report of the COI (commission of inquiry) be submitted through the General Assembly to the Security Council for its consideration and appropriate action, including through consideration of referral of the human rights situation to the appropriate international criminal justice mechanism".

Asked by Reuters if he had read the COI report, Ambassador So said it was "passed away" in February, gesturing with his hand to suggest flinging the 372-page document in the bin.

EU Ambassador Mariangela Zappia said the "overwhelming" amount of evidence in the report meant the Council could not remain silent and had to confront North Korea.

"I hate to use the word 'I'm happy' but I think we are very satisfied with the resolution that was adopted, with strong support," she told reporters after the vote.

Activists who have lobbied for scrutiny of North Korea to be widened beyond its disputed nuclear programme welcomed the vote.

"Human rights must take centre stage at the UN Security Council when it considers peace and security in the Korean Peninsula," Roseann Rife, of Amnesty International, said.

"The Human Rights Council's response to the commission of inquiry findings is a total game changer for the UN's relations with North Korea," Julie de Rivero, of Human Rights Watch, said.

"Now the U.N. Security Council and the General Assembly need to determine how to bring North Korea's leaders to justice for their human rights crimes," she said in a statement.

However, Western and Asian powers concede that for now their chances of holding North Korea liable for crimes against humanity are slim.

North Korea could only be referred to the International Criminal Court by the UN Security Council, whose veto-wielding members China and Russia both voted against the motion.

The UN Human Rights Council also extended the mandate of its investigator on North Korea, Marzuki Darusman, by one year and agreed to set up a field office to help him collect more evidence about allegations including that up to 120,000 people are held in political prison camps.

Promoted
Listen to the latest songs, only on JioSaavn.com
Members of the UN Security Council on Thursday condemned North Korea's ballistic missile launch this week as a violation of UN resolutions and will continue discussions on an "appropriate response".