Kim Jong Un ordered the reopening of the hotline at the truce village of Panmunjom at 0630 GMT on Wednesday, when South Korean officials at the border received a call from the North, the South's unification ministry said in a text message. 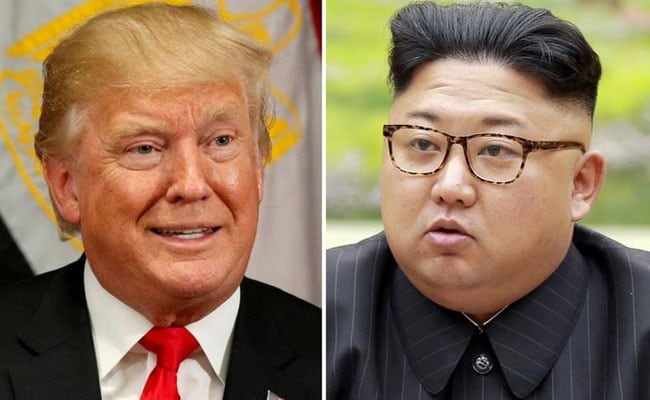 That proposal followed a New Year address by the North Korean leader in which he said he was open to speaking with the South and would consider sending a delegation to the Winter Olympics to be held in South Korea in February.

U.S. officials said Washington would not take any talks between North and South Korea seriously if they did not contribute to denuclearizing North Korea. A State Department spokeswoman said North Korea "might be trying to drive a wedge" between Washington and Seoul.

Kim ordered the reopening of the hotline at the truce village of Panmunjom at 0630 GMT on Wednesday, when South Korean officials at the border received a call from the North, the South's unification ministry said in a text message.

Officials on both sides were checking the line and conducting a conversation for about 20 minutes, the contents of which were not disclosed by the ministry.

There was no immediate U.S. comment, although a State Department spokeswoman, Katina Adams, said Washington remained in close contact with Seoul "about a unified response to North Korea."

She said that as South Korea President Moon Jae-in had stated, "'the improvement of relations between North and South Korea cannot advance separately from resolving North Korea's nuclear program.'"

The reopening of the line, which North Korea shut down in February 2016, came only hours after Trump, who has repeatedly mocked Kim as "Little Rocket Man", ridiculed the North Korean leader again on Twitter.

"Will someone from his depleted and food-starved regime please inform him that I too have a Nuclear Button, but it is a much bigger & more powerful one than his, and my Button works!" Trump tweeted.

Trump and Kim have exchanged insults in recent months, raising alarm worldwide, with Trump at times dismissing the prospect of a diplomatic solution to a crisis in which both sides have threatened to destroy each other.

On Wednesday, U.S. Vice President Mike Pence told the Voice of America Trump was responding to Kim's New Year comment about having a nuclear button on his desk, and making clear that "America will not be bullied, America will not be threatened."

Pence said that while all options remain on the table, there was the opportunity for a peaceable solution to the crisis if "North Korea will abandon their nuclear and ballistic missile ambitions, if they will dismantle those programs."

Former Vice President Joe Biden was quoted as saying by CNN that Trump had shown "really poor judgment" with the tweet.

"The only war that is worse than one that's intended, is one that is not intended," Biden was quoted as saying. "This is not a game. This is not about, you know, can I puff my chest out."

"The United States has a role in the world that the world has come to expect. I think the president is much, much too cavalier. And it's dangerous."

While appearing to open the door to discussing taking part in the Winter Olympics, Kim also warned he would push ahead with "mass producing" nuclear warheads in defiance of U.N. sanctions.

His New Year's Day speech came after a steep increase in missile launches in 2017, as well as the North's sixth and most powerful nuclear test.

North Korea had shut down the hotline in retaliation for the closing of a border factory town jointly operated by the two Koreas.

North Korea's KCNA news agency quoted Ri Son Gwon, chairman of North Korea's Committee for the Peaceful Reunification of the Fatherland, as saying the talks would aim to establish formal dialogue about sending a North Korean delegation to the Olympics.

"We will try to keep close communications with the south Korean side from sincere stand(sic) and honest attitude, true to the intention of our supreme leadership, and deal with the practical matters related to the dispatch of our delegation," he said.

South Korean presidential spokesman Yoon Young-chan said the decision to open the hotline had "significant meaning" because it could lead to constant communication.

On Tuesday, Nikki Haley, the U.S. ambassador to the United Nations, said Washington was hearing reports that Pyongyang might be preparing to fire another missile and warned of even tougher steps in response if it did so.

Chinese Foreign Ministry spokesman Geng Shuang said both sides should seize the Olympics as an opportunity to improve ties and make concrete efforts toward alleviating tension.

"All relevant sides should grab hold of this positive trend in the Korean peninsula and move in the same direction," Geng told a daily news briefing in Beijing.

Promoted
Listen to the latest songs, only on JioSaavn.com
North Korea regularly threatens to destroy South Korea, the United States and Japan, and says its weapons are necessary to counter U.S. aggression. The United States stations 28,500 troops in the South, a legacy of the 1950-53 Korean War.
© Thomson Reuters 2018