North Korea's tests of short-range missiles on Tuesday and last week came despite a meeting between Kim and Trump on June 30 at which they agreed to revive stalled talks. 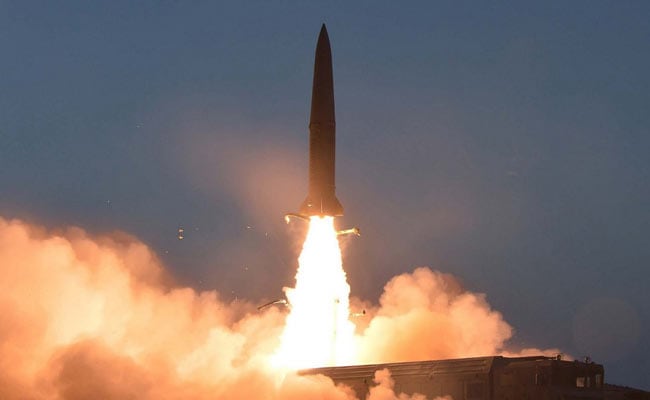 US national security adviser John Bolton said on Wednesday North Korea's recent missile tests did not violate a pledge its leader Kim Jong Un made to President Donald Trump, but Pyongyang had yet to say when working-level talks on denuclearisation would resume.

North Korea's tests of short-range missiles on Tuesday and last week came despite a meeting between Kim and Trump on June 30 at which they agreed to revive stalled talks.

Bolton told Fox Business Network the US side was still waiting to hear from North Korea about arranging the talks.

"The firing of these missiles don't violate the pledge that Kim Jong Un made to the president about intercontinental-range ballistic missiles," he said.

"But you have to ask when the real diplomacy is going to begin, when the working-level discussions on denuclearisation will begin, as Kim Jong Un again said on June 30 he was prepared to do. We're still waiting to hear from North Korea."

Both US President Donald Trump and his secretary of state, Mike Pompeo, played down last week's launches and Pompeo has continued to express hope for a diplomatic way forward with North Korea, which has been demanding relief from punishing US sanctions and for Seoul and Washington to call off the joint military exercises planned for this month.

Pompeo and the top US North Korea negotiator are attending an Association of Southeast Asian Nations (ASEAN) Regional Forum in the Thai capital this week, and Pompeo said on Tuesday he was holding out hope that US officials could meet North Korean counterparts there.

North Korea has accused Washington of breaking a promise by planning to go ahead with the military drills and has said they could derail dialogue. It has also warned of a possible end to its freeze on nuclear and long-range missile tests in place since 2017, which Trump has repeatedly held up as evidence of the success of more than a year of engagement with Kim.

A senior US defence official said on Wednesday that the United States did not plan to make changes to the drills, despite the pressure from Pyongyang.

North Korean Foreign Minister Ri Yong Ho cancelled a planned visit to this week's ASEAN forum, but Pompeo told reporters travelling with him the Americans were still open to a meeting and he hoped U.S. Special Representative for North Korea Stephen Biegun and his new North Korean counterpart could meet soon.

Trump has repeatedly hailed his good personal relationship with Kim, and some analysts believe North Korea had been emboldened to press more aggressively for US concessions by the U.S. leader's apparent eagerness to hold up his North Korea policy as a success in his 2020 re-election bid.