Otto Warmbier, who was a 21, fell into a coma for unknown reasons the night he was sentenced to 15 years in prison with hard labor in March 2016. 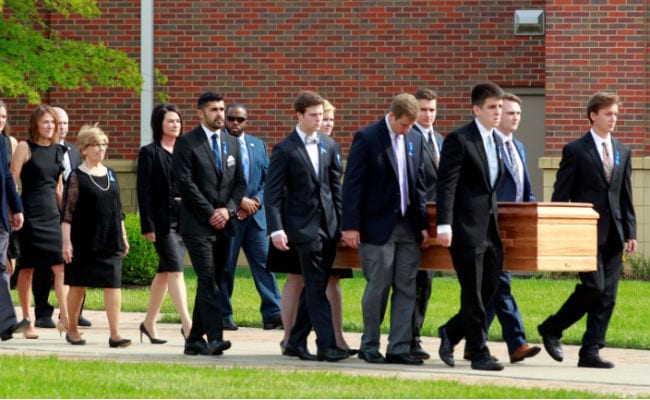 North Korea issued a $2 million bill for the hospital care of comatose American Otto Warmbier, insisting that a U.S. official sign a pledge to pay it before being allowed to fly the University of Virginia student from Pyongyang in 2017.

The presentation of the invoice - not previously disclosed by U.S. or North Korean officials - was extraordinarily brazen even for a regime known for its aggressive tactics.

But the main U.S. envoy sent to retrieve Warmbier signed an agreement to pay the medical bill on instructions passed down from President Trump, according to two people familiar with the situation. They spoke on the condition of anonymity because they were not authorized to discuss the matter publicly.

The bill went to the Treasury Department, where it remained - unpaid - throughout 2017, the people said. However, it is unclear whether the Trump administration later paid the bill, or whether it came up during preparations for Trump's two summits with Kim Jong Un.

The White House declined to comment. "We do not comment on hostage negotiations, which is why they have been so successful during this administration," White House press secretary Sarah Sanders wrote in an email.

Trump, as recently as Sept. 30, asserted that his administration paid "nothing" to get American "hostages" out of North Korea.

Warmbier, who was 21, fell into a coma for unknown reasons the night he was sentenced to 15 years in prison with hard labor in March 2016.

He was convicted on charges stemming from pulling down a propaganda sign in a Pyongyang hotel in the early hours of Jan. 1, 2016. Such an infraction would be minor in almost any other country, but in North Korea it was considered a "hostile act against the state."

Fred Warmbier, Otto's father, said he was never told about the hospital bill. He said it sounded like a "ransom" for his late son.

After his sentencing, the North Koreans held onto the comatose student for another 15 months, not even telling American officials until June 2017 that he had been unconscious all that time. News of his condition sparked a frantic effort led by Joseph Yun, the State Department's point man on North Korea at the time, to get Warmbier home.

Yun and an emergency medicine doctor, Michael Flueckiger, traveled to Pyongyang on a medical evacuation plane. They were taken to Friendship Hospital in the diplomatic district, a clinic where only foreigners are treated, and found Warmbier lying in a room marked "intensive care unit," unresponsive and with a feeding tube in his nose.

Flueckiger examined Warmbier and asked the two North Korean doctors, who had a thick pile of charts, questions about the lab work, scans and X-rays they had done.

Afterward, they went to a meeting room where the talks to free Warmbier began.

"I didn't realize what a negotiation it was going to be to secure his release," said Flueckiger, who is medical director of Phoenix Air Group, an aviation company based in Cartersville, Ga., that specializes in medical evacuations.

North Korean officials asked the doctor to write a report about his findings. "It was my impression that if I did not give them a document that I could sign off on, that would cause problems," Flueckiger said in an interview.

But the American said he did not have to lie in his report. Whatever had happened to put Warmbier into that state, it was "evident" that he had received "really good care" in the hospital, he said. The doctors had done "state-of-the-art resuscitation" to revive Warmbier after he suffered a catastrophic cardiovascular collapse, and it was "remarkable" that he had no bedsores, Flueckiger said.

"Would I have lied to get him out of there? Maybe I would have," he said. "But I didn't have to answer that question."

Yun, however, was faced with a more difficult predicament.

The North Korean officials handed him a bill for $2 million, insisting he sign an agreement to pay it before they would allow him to take Warmbier home, according to the two people familiar with the situation.

Yun called then-Secretary of State Rex Tillerson and told him about the bill. Tillerson called Trump. They instructed their envoy to sign the piece of paper agreeing that the $2 million would be paid, the two people said.

Flueckiger discussed the medical aspects of Warmbier's evacuation but said he was not authorized to discuss the diplomatic negotiations.

A State Department spokesman and Yun, who retired in early 2018, both declined to comment. Tillerson, the Treasury Department and North Korea's envoy responsible for U.S. affairs, based at its U.N. mission in New York, did not respond to requests for comment.

Warmbier's brain damage at North Korea's hands and subsequent death caused widespread shock in the United States, but the news that North Korea expected the U.S. government to pay for his care has caused further backlash.

"This is outrageous. They killed a perfectly healthy and happy college student and then had the audacity to expect the U.S. government to pay for his care," said Greg Scarlatoiu, executive director of the Committee for Human Rights in North Korea.

Having signed the documentation and secured Warmbier's release, Yun and Flueckiger flew to Cincinnati to return the young man to his parents. Otto Warmbier died six days later, but the cause of his severe brain damage has never been ascertained.

"Otto Warmbier was mistreated by North Korea in so many ways, including his wrongful conviction and harsh sentence, and the fact that . . . they refused to tell his family or our country about his dire condition they caused," said Sen. Rob Portman (R-Ohio). "No, the United States owes them nothing. They owe the Warmbier family everything."

Sen. Sherrod Brown, D-Ohio, said Warmbier would be "alive today if not for the regime's sham legal proceedings."

"After the cruel and inhumane way the North Korean regime treated Otto Warmbier, it's unconscionable to issue a medical bill and expect payment," Brown said.

Fred Warmbier accused North Korea of beating and torturing Otto in detention, although doctors who examined him at the University of Cincinnati Medical Center said there was no evidence of that. His parents requested that an autopsy not be performed.

North Korea insisted that Warmbier became sick after eating pork and spinach, but it also said he had a severe allergic reaction to sedatives he was given.

The director of North Korea's Friendship Hospital said the family's accusations that Warmbier died as a result of torture were a "total distortion of the truth."

"The American doctors who came . . . to help Warmbier's repatriation acknowledged that his health indicators were all normal and submitted a letter of assurance to our hospital that they shared the diagnostic result of the doctors of our hospital," state media quoted the unnamed hospital director as saying in October last year.

Fred and Cindy Warmbier sued North Korea in December over their son's death and were awarded $501 million in damages - money that the Kim regime is unlikely ever to pay. But Judge Beryl A. Howell, of the U.S. District Court for the District of Columbia, said the award was "appropriate to punish and deter North Korea" for the "torture, hostage taking and extrajudicial killing of Otto Warmbier."

The Warmbiers have blamed Kim for their son's death, but Trump has said he believes the North Korean leader's claims that he did not know about the student's treatment.

"I don't believe he would have allowed that to happen," Trump said in Hanoi in February after his second summit with Kim. Trump said he spoke to Kim about the death of Warmbier and that Kim "feels badly about it."

"He tells me he didn't know about it, and I take him at his word," Trump said in February.

North Korea has taken Americans as hostages before, and this is not the first time Pyongyang has threatened huge hospital bills for detained Americans.

Kenneth Bae, a Christian missionary and diabetic who was held in North Korea for almost two years, said he was told he would be charged 600 euros a day for his care at Friendship Hospital. The bill for his first hospital stint while in detention came to 101,000 euros - about $120,000 at the time, Bae wrote in his memoir, "Not Forgotten."

By the end of his detention in November 2014, after another spell in the hospital, Bae calculated that the North Koreans would be charging him $300,000. In the end, he was released without paying any of it.