It was not immediately clear how many missiles were fired Thursday or what type they were, but they appeared to be anti-ship missiles rather than the ballistic missiles North Korea had been testing recently. 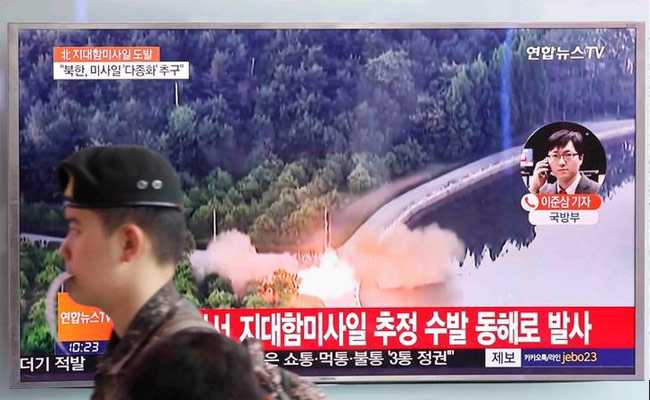 North Korea fired what appeared to be several land-to-ship missiles off its east coast in South Korea.

TOKYO: North Korea fired another salvo of missiles Thursday morning, keeping up the relentless pace of testing as it advances toward its goal of producing an intercontinental ballistic missile capable of reaching the mainland United States.

The latest barrage comes after three launches in May, and means Kim Jong Un has now ordered almost as many missile launches this year alone as his father oversaw - 16 - during 17 years in power.

It was not immediately clear how many missiles were fired Thursday or what type they were, but they appeared to be anti-ship missiles rather than the ballistic missiles North Korea had been testing recently.

"North Korea fired multiple unidentified projectiles, assumed to be surface-to-ship missiles, this morning from the vicinity of Wonsan," South Korea's Joint Chiefs of Staff said, according to local media.

Wonsan is on North Korea's east coast, on the sea between the Korean Peninsula and Japan, and has been the site of several recent launches.

Cruise missiles are generally considered to be less provocative than ballistic missiles, although cruise missiles can also carry warheads.

The Missile Technologies Control Regime, the multilateral export control framework, draws the line at missiles that can travel 300 kilometers (186 miles) or more, and deliver a payload of 500 kilograms (1,100 pounds) or more.

"These missiles only went 200 km, and their payload is probably maybe about 250 kg max," said Shea Cotton, a researcher at the James Martin Center for Nonproliferation in California, adding that this was only an estimate while awaiting further data.

"Basically, this isn't the sort of weapon that North Korea can use to cow South Korea into submission or threaten Japan," Cotton said.

Kim has been pushing ahead with his weapons program at a rate that has alarmed analysts and policymakers, ordering the launches of a variety of rockets that appear to be part of his ambition to obtain an intercontinental ballistic missile capable of reaching the U.S. mainland.

The technological advances that North Korea has demonstrated in the last six months were of "great concern," the head of the U.S. Missile Defense Agency, Vice Adm. James Syring, said in Washington on Wednesday.

"The advancements in the last six months have caused great concern to me and others, in the advancement of and demonstration of technology of ballistic missiles from North Korea," Syring told the U.S. House Armed Services Committee, according to wire reports from the hearing.

"It is incumbent on us to assume that North Korea today can range the United States with an ICBM carrying a nuclear warhead," he said.

While the United States was "addressing the threat that we know today," it was "comfortably ahead of the threat," Syring said.

North Korea has been testing at a rapid pace but it has also been demonstrating many different types of missiles.

The previous launch, a week before, was a medium-range ballistic missile that flew about 310 miles, landing in the sea. Kim, who was photographed at the launch site, declared it "perfect."

The first launch in May was a ballistic missile that flew even further, some 450 miles.

Efforts to dissuade Kim from advancing his missile program have not been successful. Rounds of sanctions imposed through the United Nations and directly by concerned countries - including the United States and Japan - have failed to change North Korea's calculus.

President Donald Trump has repeatedly urged China, North Korea's main benefactor, to crack down on trade with North Korea and fully implement international sanctions against the Kim regime, but it is not clear that Beijing is doing so, analysts say.

China's top priority is stability on its borders and, angry as it is about North Korea's continued provocations, it is considered unlikely to inflict serious pain on the Kim regime while it conducts only missile tests. Another nuclear test, however, could be a red line for Beijing, analysts say.

Against expectations, Kim has refrained from carrying out a sixth nuclear test.

(This story has not been edited by NDTV staff and is auto-generated from a syndicated feed.)
Comments
North KoreaNorth Korea missileKim Jong Un