Pyongyang has made similar accusations in the past, none of which have been verified. 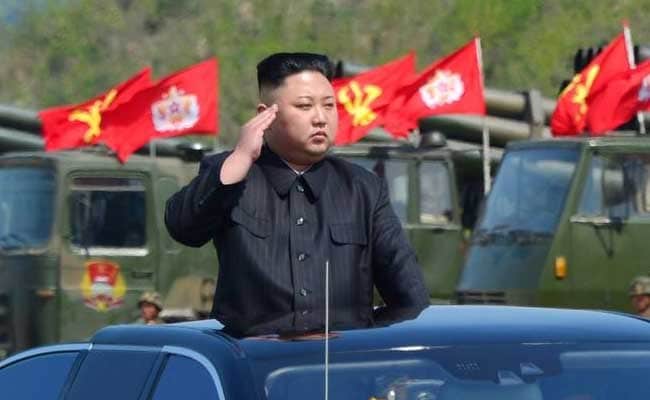 The accusation came amid sharply increased tensions between the United States and North Korea over Pyongyang's nuclear and missile programs, and just a few days before a presidential election in South Korea.

On Thursday, the U.S. House of Representatives voted overwhelmingly to tighten sanctions on North Korea by targeting its shipping industry and companies that do business with the reclusive state.

The measure, passed by a vote of 419 to 1, would need to be approved by the Senate before being sent to the White House for President Trump to sign into law.

North Korea's Ministry of State Security said Friday that the U.S. Central Intelligence Agency and South Korea's National Intelligence Service had "ideologically corrupted" and bribed a North Korean timber worker employed in Russia to return to the country and try to kill its leader.

Pyongyang has made similar accusations in the past, none of which have been verified.

The intelligence agencies, "hotbed of evils in the world, hatched a vicious plot to hurt the supreme leadership of the DPRK," the ministry said in a statement, using the initials for the Democratic People's Republic of Korea.

The ministry's statement was carried by the official Korean Central News Agency.

It alleged that the citizen, named Kim, was given $290,000 over the course of various meetings, meant for himself and "terrorist accomplices," as well as satellite communications equipment. He was supposed to target the "supreme leadership" at a public event or military parade, using "bomb terrorism" that involved "biochemical substances including radioactive substance and nano-poisonous substance," it said.

The ministry claimed that the "lethal results" of detonating a bomb packed with such substances would not take effect for six to 12 months. It said that "only the CIA" can produce the toxic material and that the "hardware, supplies and funds" for the alleged plot were to be supplied by the South Korean intelligence service. It charged that the "puppet" agency's chief "directly organized the terrorist operation," which it described as a "declaration of war aimed to . . . eclipse the eternal sun of the DPRK."

The lengthy statement reserved some of its harshest language for the United States, which it called a "kingpin of terrorism" and "empire of evil" whose acts "surpass terrorism which is said to be perpetrated by 'Islamic State' forces."

Cui Zhiying, a professor at the Center for Asia-Pacific Studies at Tongji University in Shanghai, said the bizarre accusation appeared to be just another episode in a "war of words" between the two sides.

"There is no doubt that the United States and South Korea have been thinking about eradicating Kim Jong Un, but it is hard to put into practice," he said. He said the claim was more likely a North Korean response to "escalating threats" from the U.S. side.

CIA Director Mike Pompeo was in South Korea this week, conducting "detailed security discussions" with his South Korean counterpart and visiting an island near the border between the North and the South, the U.S. military command in South Korea said in a statement Tuesday.

The Trump administration has not ruled out a military strike against North Korea's missile program but says it first wants to tighten sanctions against the regime and is even prepared to negotiate in the right circumstances.

Secretary of State Rex Tillerson has said that the administration is not seeking regime change in North Korea, and he told ABC last month that he was "not aware" of any plans to assassinate Kim.

Last week, however, Ohio Gov. John Kasich (R) told reporters that the best way to solve the North Korea problem was to "eradicate the leadership."

Sen. Cory Gardner, R-Colo., chairman of the Senate Foreign Relations subcommittee on East Asia, said last month that the United States should work with South Korea, Japan and China to formulate a plan for what would happen after the fall of Kim.

On Friday, a spokesman for North Korea's Foreign Ministry called Gardner's remarks a "provocation that cannot be overlooked" and an affront to the dignity of the country's supreme leadership, from a man who was "tantamount to mentally deranged."

John Delury, a professor of international relations at Yonsei University in Seoul, said one of the North Korean regime's main narratives is that the country faces relentless hostility from the outside world, driven by the United States.

"That is their central argument as to why they need to develop a military deterrent," he said. "Whether there is some truth [to the assassination claim] or whether it is entirely fictional, it fits this narrative."

On Friday, China responded to the events in the U.S. Congress by saying it supported U.N. Security Council resolutions but opposed the imposition of "unilateral sanctions."

The North Korean claim was somewhat ironic, considering that Kim's estranged half brother, Kim Jong Nam, was assassinated in February in Malaysia with a banned chemical weapon identified as VX nerve agent, according to Malaysian authorities. Two women smeared the deadly substance on his face at Kuala Lumpur International Airport, and he died within 20 minutes.

Promoted
Listen to the latest songs, only on JioSaavn.com
Malaysia has implicated eight North Koreans in the killing, including a diplomat and a scientist. South Korea squarely blamed Kim Jong Un, accusing him of ordering the elimination of a potential rival.