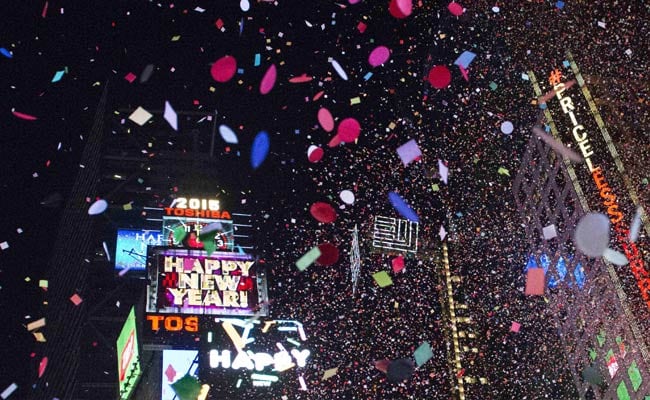 While security is always tight in Times Square on New Year's Eve, particularly since the attacks on the World Trade Center in 2001, extra precautions were put in place on Wednesday to prevent violence at the famed midtown Manhattan crossroads.

Hours before the giant crystal ball was to drop at midnight, bomb-sniffing dogs and counter-terrorism units joined uniformed officers posted on the streets around Times Square.

More officers were stationed on rooftops and at nearby subway stations to monitor an area comprising at least eight blocks of midtown Manhattan.

But all was peaceful just after midnight as fun-seekers roared in celebration against a backdrop of fireworks. Many attendees were enclosed inside metal-gated corrals set up to control the throng that officials estimated could reach 1 million despite the frigid weather.

"It was my first time celebrating New Year's Eve on Times Square. And even if it was cold, it was amazing," said 16-year-old Matthew Gonzalez, who made the trip from Connecticut with two friends for the celebration.

In keeping with New York City tradition, Mayor Bill de Blasio presided over the ball drop in Times Square, pressing a ceremonial button that sent the sphere on its descent.

Police in Tampa, Florida, said today that "celebratory New Year's gunfire" inadvertently struck and wounded a woman attending a fireworks display at Busch Gardens at 11:50 pm on Wednesday. The bullet that lodged in the woman's leg appeared to have been fired into the air, although it was undetermined where the bullet came from, Tampa police said.

In the Denver suburb of Aurora, a fight that broke out today at a house party left four people injured, one critically, although none of the stab wounds were considered life threatening, Aurora police said.

The year 2014 was marked by months of protests over the deaths of unarmed black males at the hands of white police officers.

Tensions in New York flared up nearly two weeks ago when two officers sitting in a patrol car in Brooklyn were slain in an apparent act of retribution against law enforcement.

The ambush of the two officers, Wenjian Liu and Rafael Ramos, was carried out by a gunman who vowed to avenge the deaths of Eric Garner in New York and Michael Brown in Ferguson, Missouri.

New York Police Commissioner William Bratton said that over the past week, more than 80 threats against police had been made on social media sites, leading to at least 15 arrests.

"Any threat against my officers will be dealt with very quickly, very effectively," he said at a news conference on Wednesday in Times Square. "We're not going to let any of them go by the board."

The city had denied a permit to allow the group, called "Rock in the New Year with Resistance to Police Murder," to organize a march from Union Square to Times Square at 10 pm local time.

Undeterred, the group said its attendees would move up sidewalks where a permit was not required. At least one demonstrator had been taken into custody as of Thursday morning.

A smaller protest took place in Boston on Wednesday, with dozens of people peacefully staging a "die-in" demonstration at Boston's historic First Night festivities, a yearly family event that draws hundreds of small children for New Year's Eve. No arrests were reported.

In Times Square, revelers, many of whom were not New Yorkers, seemed unconcerned at the prospect of protests and oblivious to the bolstered security.

Promoted
Listen to the latest songs, only on JioSaavn.com
"There was a few people that came around with protest signs and we were like, 'Yeah, whatever, we don't care.' We just want to have fun," said Phoebe Iacono, 20, a tourist from Sydney, Australia.

She said she had been waiting since 9 am in the 32 degree Fahrenheit air to assure a prime viewing spot of the ball drop. "I can't feel my toes," she said.
© Thomson Reuters 2015

Canada To Pay $2 Billion To Abuse Survivors From Indigenous Communities