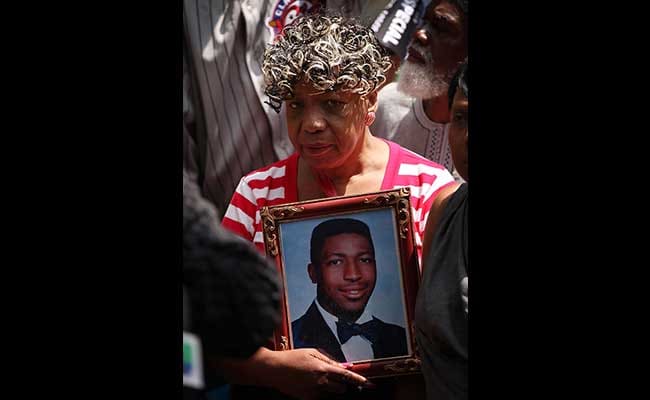 Gwen Carr, the mother of Eric Garner with other family members who have lost loved ones in incidents involving the New York City Police Department.(AFP)

New York: New York announced on Monday that it had reached a $5.9 million settlement with the family of a black man who died after being placed in a choke hold, sparking a bitter nationwide debate about police tactics and racism.

Eric Garner, 43, a father of six, was wrestled to the ground by white officers who took him into custody for allegedly selling illegal cigarettes on July 17, 2014 in Staten Island.

Graphic cellphone footage of the confrontation showed the heavily built Garner, who had asthma, complaining repeatedly "I can't breathe" after being bundled onto the ground by several police officers.

The New York medical examiner's office classified his death as a homicide but last December a grand jury refused to prosecute the white officer who deployed the fatal choke hold.

The Garner family last October filed the first step towards seeking $75 million in damages. But on Monday, the city's comptroller, Scott Stringer announced the $5.9 million settlement.

Stringer said the city had "not admitted liability" but said the agreement was "in the best interests of all parties."

"We are all familiar with the events that lead to the death of Eric Garner and the extraordinary impact his passing has had on our city and our nation," he said.

"It forced us to examine the state of race relations, and the relationship between our police force and the people they serve."

The family sought damages for "negligence, recklessness and carelessness," naming eight officers, the city and the New York police department.

Choke holds are outlawed by New York police. While being wrestled to the ground, Garner lost consciousness and was pronounced dead after being transferred to hospital.

Garner's death is just one of a string of high-profile, racially-charged incidents in which white officers have been accused of using unreasonable force or being too quick to fire at black suspects.

But it was the first in the recent wave of incidents that have sparked a nationwide debate about police tactics and racism.

After his death, New York began a pilot program to start equipping police officers with body cameras to record their behavior towards the public.