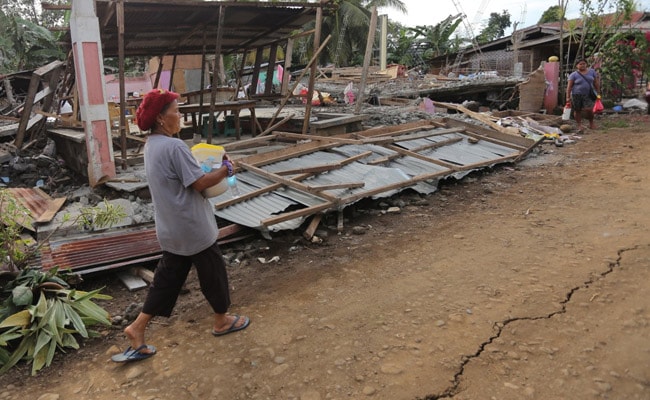 The 6.5 magnitude quake hit the island of Mindanao.

A powerful quake struck in the southern Philippines on Thursday promoted people flee homes, schools and malls, with initial reports of damage to some buildings.

Frightened residents ran to safety as the strong shaking hit just as businesses and classes opened for the day.

"Everyone rushed outside," said Reuel Limbungan, mayor of the Tulunan town, which was once again near the epicentre. "It was as strong as the previous one."

USGS initially said the quake had a magnitude of 6.8, and added there was no threat of a tsunami.

The Philippines suffers regular tremors as part of the Pacific "Ring of Fire", an arc of intense seismic activity that stretches from Japan through Southeast Asia and across the Pacific basin.

This is the third quake to strike in the same area of Mindanao island, which makes up the southern third of the Philippines, since mid-October.

In the quake earlier this week, a teenage boy was crushed by a falling wall as he tried to escape his school in Magsaysay, the town spokesman told AFP. Though other students were injured in a "stampede" to escape the building, they survived.

Rock and landslides unleashed by the violent shaking killed four others, while a collapsed wall crushed a man, authorities said.

At least 50 people were hurt by falling debris, including some seven pupils and teachers hurt escaping their collapsed elementary school.

The area was still suffering the effects of a 6.4-magnitude quake that hit less than two weeks ago, killing at least five people and damaging dozens of buildings.

Residents fled homes across the Mindanao region and a mall caught fire in the city of General Santos shortly after the quake struck on October 16.

Hundreds of people were still displaced two weeks after that quake when the new one struck earlier this week, forcing hundreds more from their homes.

One of the deadliest quakes to hit the Philippines recently was in April, when 16 people were killed as a building near the capital Manila collapsed and the secondary Clark airport was shut down due to damage to the passenger terminal.

High-rise structures in the capital swayed after the April quake, leaving some with large cracks in their walls.