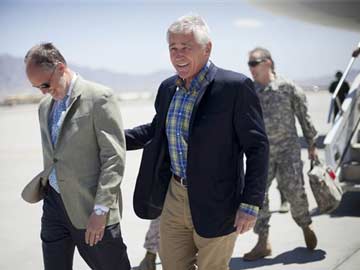 US Defence Secretary Chuck Hagel, right, walks on the tarmac with U.S. Ambassador to Afghanistan James Cunningham, left, during his arrival to Bagram Airfield in Afghanistan, Sunday, June 1, 2014

Washington: US Defense Secretary Chuck Hagel expressed hope on Sunday the release of US Army Sergeant Bowe Bergdahl would lead to direct US talks with the Taliban.

"It could, it might and we hope it will present an opening," Hagel said in an interview from Bagram Air Base in Afghanistan with NBC's "Meet the Press."

Hagel noted that the United States had engaged in talks with the Taliban before, until they were broken off in 2012, and that it strongly supported an Afghan-led effort to reach a peace agreement with the Taliban.

"So maybe this will be a new opening that can produce an agreement," he said.

Bergdahl, 28, was released Saturday near the Afghan-Pakistani border after nearly five years in Taliban captivity, in a surprise development that came as the United States days is winding down its 13-year intervention in Afghanistan.

Hagel credited Qatar and its emir with Bergdahl's release in a trade for five high-level Taliban militants held at the US prison in Guantanamo Bay, Cuba.

Promoted
Listen to the latest songs, only on JioSaavn.com
Hagel denied that the United States had negotiated with terrorists, as Republican critics are charging, and defended the trade as an effort to save Bergdahl's life.

"This is a guy who probably went through hell for the last five years," he said. "And let's focus on getting him well and getting him back with his family."