New Confirmation Of Chlorine Use In Syria

The OPCW said environmental samples had "demonstrated the unusual presence of chlorine in the local environment". 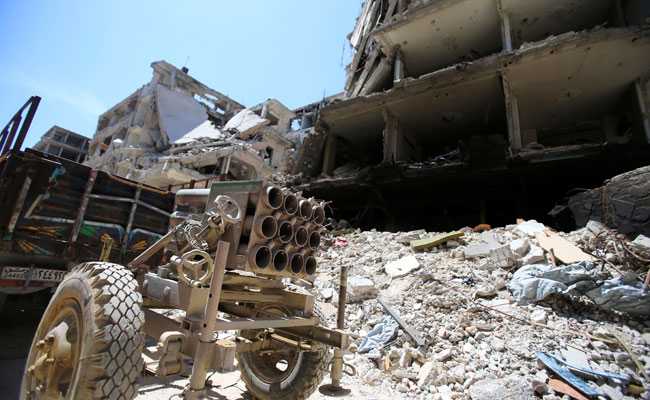 The Hague, Netherlands: Global arms experts Wednesday confirmed chlorine was used in a Syrian town in February leaving residents fighting for breath, as the world awaits the results of a probe into last month's alleged poison gas attack on Douma.

A fact-finding mission by the Organisation for the Prohibition of Chemical Weapons determined that "chlorine was released from cylinders by mechanical impact in the Al Talil neighbourhood of Saraqeb" on February 4, an OPCW statement said.

The team's conclusions were based on finding two cylinders "which were determined as previously containing chlorine."

In addition, the OPCW said environmental samples had "demonstrated the unusual presence of chlorine in the local environment".

Its team had also interviewed witnesses, and found that a "number of patients at medical facilities shortly after the incident showed signs and symptoms consistent with exposure to chlorine."

In line with its mandate the watchdog did not say which side in Syria's complex seven-year-old civil war was responsible for using the chlorine.

Eleven people were treated for breathing difficulties the day after Syrian government raids on Saraqeb, the Britain-based Syrian Observatory for Human Rights said at the time.

"I strongly condemn the use of toxic chemicals as weapons by anyone, for any reason, and in any circumstances," said OPCW head Ahmet Uzumcu.

"Such acts contradict the unequivocal prohibition against chemical weapons."

Results are also awaited from a difficult mission by an OPCW fact-finding team to the Syrian town of Douma, after medics and rescuers said 40 people died in a chlorine and sarin attack on April 7.

The Douma attack triggered a wave of punitive missile strikes against alleged chemical weapons facilities in Syria by the United States, Britain and France.

Results end of May

But Syria and Russia have accused Syrian volunteer rescue workers of staging shocking video footage of the alleged attack at the behest of the United States.

Russian foreign ministry spokeswoman Maria Zakharova said the results of the Douma mission would not be known "before the end of May".

"We believe that the results of the investigation will be balanced and exhaustive ... and will help establish a real picture of what happened on April 7," she said in a televised briefing.

Zakharova added that Moscow believed the OPCW findings "will confirm the baselessness of the contrived and unproven allegations against Damascus."

The OPCW's fact-finding mission was set up in 2014 to investigate repeated allegations of chemical weapons use in the Syrian conflict.

Damascus joined the Chemical Weapons Convention, which bans the use or production of toxic arms, in 2013 under a deal brokered by the United States and Russia.

The move averted threatened US air strikes by the previous US administration after about 1,000 people died in an August 2013 sarin gas attack.

The OPCW has said all of Syria's declared toxic arms stock has since been destroyed, but has warned repeatedly about gaps in the Syrian regime's declaration.

In October, a joint OPCW-UN panel found the Syrian air force was behind a sarin gas attack on the then opposition-held village of Khan Sheikhun in April 2017 that left scores dead.

Promoted
Listen to the latest songs, only on JioSaavn.com
Before the panel's mandate ran out late last year, it also found the Syrian military to blame for at least three chemical attacks in villages in 2014 and 2015. And it has said the Islamic State group was behind a 2015 mustard gas attack.