New China Airstrips a Potential Headache for Neighbors, US 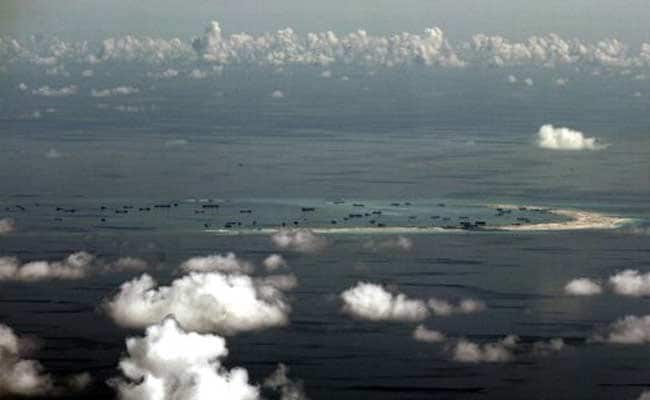 In this Monday, May 11, 2015, file photo, this aerial photo taken through a glass window of a military plane shows China's alleged on-going reclamation of Mischief Reef in the Spratly Islands in the South China Sea. (AP)

Beijing: China's campaign of island building in the South China Sea might soon quadruple the number of airstrips available to the People's Liberation Army in the highly contested and strategically vital region.

That could be bad news for other regional contenders, especially the US, the Philippines and Vietnam.

The island construction work that is creating vast amounts of new acreage by piling sand on top of coral reefs is now moving into the construction stage, with buildings, harbors and, most importantly, runways appearing in recent months.

China now operates one airfield at Woody Island in the Paracel island chain, and satellite photos show what appears to be work on two, possibly three, additional airstrips on newly built islands in the Spratly archipelago to the east.

The bases could have a "significant impact on the local balance of power" by helping bolster the forward presence of Chinese coast guard and navy forces, said Euan Graham, director of the International Security Program at the Lowy Institute in Sydney, Australia.

As with most South China Sea developments, China has remained opaque about its plans for the island airstrips. At a recent monthly briefing, Defense Ministry spokesman Wu Qian declined to say how many China planned to build or what their purpose would be, repeating only that all military infrastructure was "purely for defensive purposes."

Beijing claims almost all of the South China Sea and its islands and has created seven new features in the Spratlys since last year that are permanently above water totaling more than 800 hectares (2,000 acres) in area, according to satellite photos collected by U.S. government agencies and private groups including the Washington-based Center for Strategic and International Studies.

While China insists its island building works are justified and don't constitute a threat to stability, further militarization of the region seems assured given China's increasingly robust assertions of its territorial claims.

Those perceptions were reinforced with the deployment in October of advanced J-11BH/BHS fighters of the navy air force to Woody Island that was revealed online in China in October.

China's military has declined to comment on the reports.

The island's 2.4-kilometer (1.49-mile) long runway will soon be eclipsed by one more than 3 kilometers (10,000 feet) long on the reclaimed island built atop Fiery Cross Reef in the Spratlys, the satellite photos show. Another runway is being built on Subi Reef, with signs of similar work underway on nearby Mischief Reef.

Patrols by fighter jets based on the islands, most likely temporarily given the salty climate and frequent storms, could serve to intimidate other claimants, especially the Philippines and Vietnam. That could also complicate regular operations by U.S. forces which insist on freedom of navigation and overflight over the entire sea.

"In periods of tension, the intimidation value of air patrols from the islands would be considerable," Graham said.

The airfields would allow Chinese aircraft to refuel, repair and if necessary, rearm without having to fly the more than 1,000 kilometers (620 miles) to the nearest Chinese air base on Hainan island, said Hans Kristensen, a China security expert with the Federation of American Scientists.

They would also be highly vulnerable to bombing in an actual conflict, although their presence alone would require additional planning and effort by opponents.

Short of that, the issue grows murkier and more troublesome, especially if China were to announce a zone of air control over all or part of the South China Sea. In that case, the airstrips could be launching points for patrols, enforcement operations and possibly strikes.

China announced an initial air defense identification zone over much of the East China Sea in late 2013, a designation the US, Japan and others refused to recognize.

Questioned on plans for a South China Sea zone, Defense Ministry spokesman Wu Qian said that would depend on threats to China's interests and security.

"Therefore we will take into consideration a number of factors in making the decision," Wu said.

Other countries also operate airstrips on their South China Sea holdings, but their size and level of sophistication are dwarfed by China's new developments.

Vietnam's strip on Spratly island is just 550 meters (1.8 feet), just long enough to accommodate slow-moving cargo and surveillance planes. Those operated by the Philippines on Thitu Island, also known as Pagasa, and Taiwan on Itu Aba, or Taiping Island, and Malaysia on Swallow Reef, are about twice as long, allowing them to land fighters as well.

Yet, only Fiery Cross Reef is long enough to accommodate bombers like the H-6K, whose air launched cruise missiles increase its destructive power.

The new airstrips will also come in handy as China develops its aircraft carrier program, particularly for training pilots in simulated night landings or to recover planes in difficult conditions.

However, their usefulness is constrained by the need for large amounts of jet fuel on hand, along with the need to reinforce strips built on sand to handle bombers and other heavy aircraft.

"If we start to see satellite evidence of fuel storage going in on a large scale in the artificial islands, that will be the clearest indicator that China is planning to develop them as active air bases," Graham said.