New Breed Of Pirates Sail In The Caribbean, As Venezuela Disintegrates

Boarded ships, terrorized fishermen and lawless coastlines. It's a 21st-century version of an old menace. 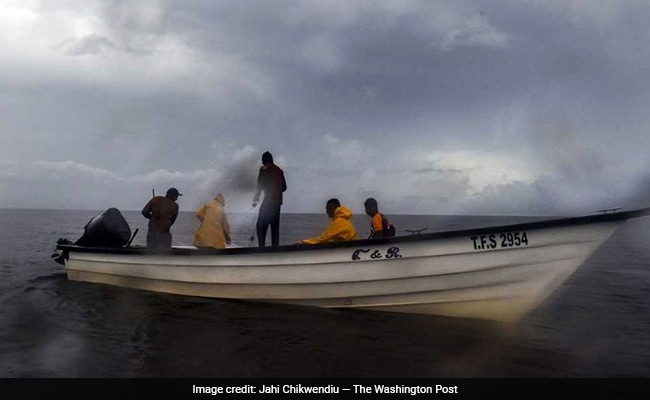 Livelihoods affected by the increasing criminality of piracy on the waters.

In the flickers of sunlight off the cobalt blue of the Caribbean sea, the vessel appeared as a cut on the horizon. It sailed closer. But the crew of the Asheena took no heed.

"We be lookin' for our red fish as normal, thinkin' they be fishin', too," said Jimmy Lalla, 36, part of the crew that had dropped lines in Trinidadian waters last April a few miles off the lawless Venezuelan coast.

The other vessel kept approaching. "They be needin' help?" Lalla recalled wondering as it pulled aside their 28-foot pirogue. A short, sinewy man jumped on board, shouting in Spanish and waving a pistol.

Centuries after Blackbeard's cannons fell silent and the Jolly Roger came down from rum ports across the Caribbean, the region is confronting a new and less romanticized era of pirates.

Political and economic crises are exploding from Venezuela to Nicaragua to Haiti, sparking anarchy and criminality. As the rule of law breaks down, certain spots in the Caribbean, experts say, are becoming more dangerous than they've been in years.

Often, observers say, the acts of villainy appear to be happening with the complicity or direct involvement of corrupt officials - particularly in the waters off collapsing Venezuela.

"It's criminal chaos, a free-for-all, along the Venezuelan coast," said Jeremy McDermott, co-director of Insight Crime, a nonprofit organization that studies organized crime in Latin America and the Caribbean.

Comprehensive data on piracy is largely lacking for Latin America and the Caribbean. But a two-year study by the nonprofit Oceans Beyond Piracy recorded 71 major incidents in the region in 2017 - including robberies of merchant vessels and attacks on yachts - up 163 percent from the previous year. The vast majority happened in Caribbean waters.

The incidents range from glorified muggings on the high seas to barbaric attacks worthy of 17th-century pirates. 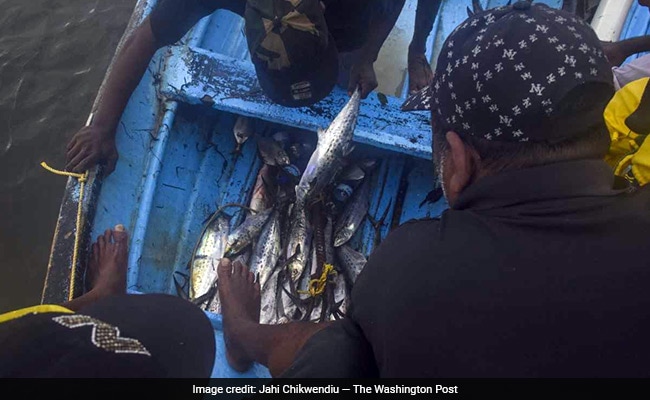 Fishermen ride in a boat where some have been either robbed and/or killed by Venezuelan pirates.

In April, for instance, masked men boarded four Guyanese fishing boats floating 30 miles off the coast of the South American nation. The crews, according to survivors' accounts, were doused with hot oil, hacked with machetes and thrown overboard, then their boats were stolen. Of the 20 victims, five survived; the rest died or were left unaccounted for.

David Granger, the president of Guyana, decried the attack as a "massacre." Guyanese authorities have suggested that it could have been linked to gang violence in neighboring Suriname.

"They said they would take the boat and that everyone should jump overboard," survivor Deonarine Goberdhan, 47, told Reuters. After being beaten and thrown in the sea, he said, "I tried to keep my head above water so I could get air. I drank a lot of salt water. I looked to the stars and moon. I just hoped and prayed."

There have been reports of piracy over the past 18 months near Honduras, Nicaragua, Haiti and St. Lucia. But nowhere has the surge been more notable, analysts say, than off the coast of Venezuela.

An economic crisis in the South American country has sent inflation soaring toward 1 million percent, making food and medicine scarce. Malnutrition is spreading; disease is rampant; water and power grids are failing from a lack of trained staff and spare parts. Police and military are abandoning their posts as their paychecks become nearly worthless. Under the socialist government of President Nicolás Maduro, repression and corruption have increased.

The conditions are compelling some Venezuelans to take desperate action.

One Venezuelan port official, who spoke on the condition of anonymity to address official corruption, said that Venezuelan coast guard officers have been boarding anchored vessels and demanding money and food. He said commercial ships, in response, are increasingly anchoring farther off the coast, and turning off their motors and lights to avoid being seen at night. 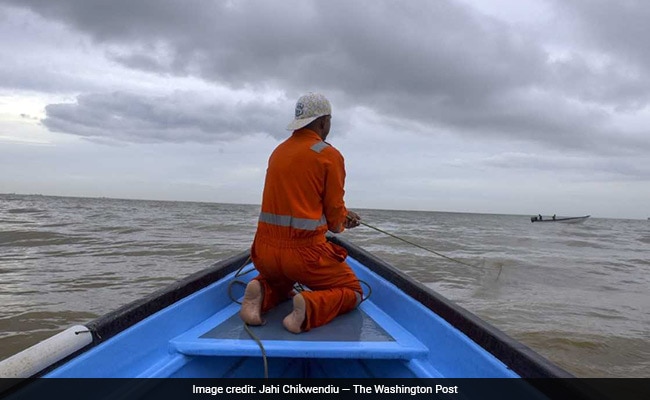 Trafficking and piracy, locals say, have recently been expanding and becoming more violent.

In July, one vessel from the local company Conferry, which offers freight services to nearby Venezuelan islands, was raided by three men brandishing knives and guns near the port of Guanta. Four crew members were left tied up for hours while food and electronics were stolen.

In January in Puerto La Cruz, also on the northeast coast, seven armed burglars boarded an anchored tanker. They tied up the vessel's guard on duty, then robbed its stores. Similar incidents have been reported in the months since, according to the Commercial Crime Services division of the London-based International Chamber of Commerce.

Trinidad and Tobago, an island nation of 1.4 million people within eyeshot of the Venezuelan coast, has long worried about crime emanating from its neighbor. Since the 1990s, drug smugglers have shipped marijuana and Colombian cocaine from Venezuelan ports to Trinidad, and from there to other Caribbean countries and beyond.

Trafficking and piracy, locals say, have recently been expanding and becoming more violent. Five Trinidadian fishermen in the southern port of Cedros, who spoke on the condition of anonymity, citing fear for their safety, said in interviews that they had witnessed a burst of Venezuelan boats arriving in recent months smuggling military-issue guns as well as drugs, women and exotic animals.

"Sometimes, those Venezuelans are willing to trade the guns and animals for food," said one 41-year-old fisherman.

Another fisherman said he was held for hours in January by Spanish-speaking pirates while his brother was contacted to pay a $500 ransom.

A Trinidadian coast guard vessel was dispatched to patrol the waters this year after several high-profile incidents of smuggling and piracy. But locals say the criminals simply wait until the patrol passes, and then they act.

Trinidadian authorities did not respond to repeated requests for comment.

Opposition politicians, however, are decrying a surge in piracy. They also say that the flow of automatic weapons from Venezuela - some of which appear to be coming from military stores - is contributing to a swelling homicide rate in Trinidad. 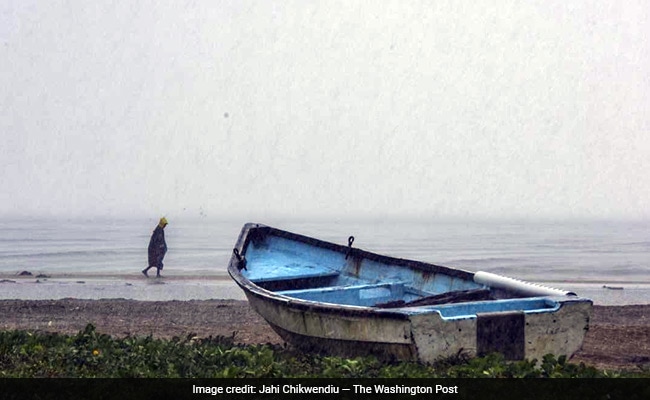 A raincoated fisherman walks through the mist on the beach in Trinidad as a boat makes its way to shore.

"This reminds me of how the problems started off the coast of eastern Africa," said Roodal Moonilal, a lawmaker from the opposition United National Congress party, referring to a sharp rise in ship hijackings off the coast of lawless Somalia several years ago. "What we're seeing - the piracy, the smuggling - it's the result of Venezuela's political and economic collapse."

For those who make their living plying the warm waters of the Caribbean, piracy is a new source of fear. These days, locals are fishing closer to shore, and sometimes at night, to avoid the risk of attacks.

On the April afternoon when the Asheena was boarded, Lalla said, he was terrified.

"The man talkin' Spanish, he point the gun at me, then he point at the water. I be knowin'. He be wantin' that I jump," he said.

So he leaped overboard. The first mate - Narendra Sankar, 22 - followed him moments later. The men were swimming toward an offshore oil rig when Sankar suffered a cramp.

"I had already reached the rig, so I had to be jumpin' back in, to help him," Lalla said. "He was goin' to be drownin'." 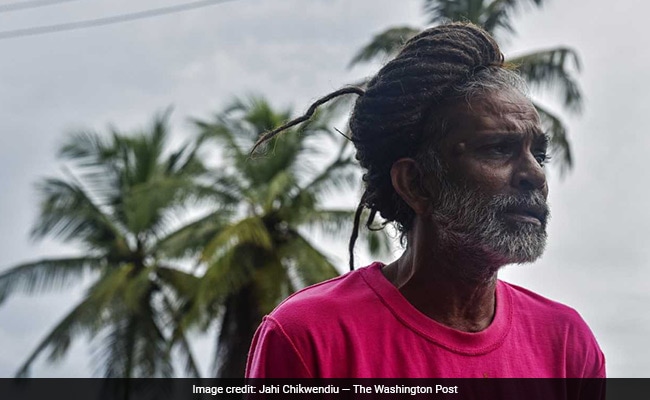 Deoraj Balsingh, 58, is the father of a fishing boat captain who was kidnapped by Venezuelan pirates on the waters between Venezuela and Trinidad.

They watched as the pirates seized their vessel, outfitted with two expensive outboard motors. Their captain, Andell Plummer, was still aboard. The two men were rescued from the water by a passing fishing boat. When they reported the attack to authorities, Lalla said, they were told: "We have no boat to go after them; we can do nothing."

There has been no word of Plummer since, the men say. Trinidad's Ministry of National Security did not respond to a request for comment about his case.

"My boy, they take him!" said the captain's father, Deoraj Balsingh, 58, standing by a muddy Trinidadian dock surrounded by boats.