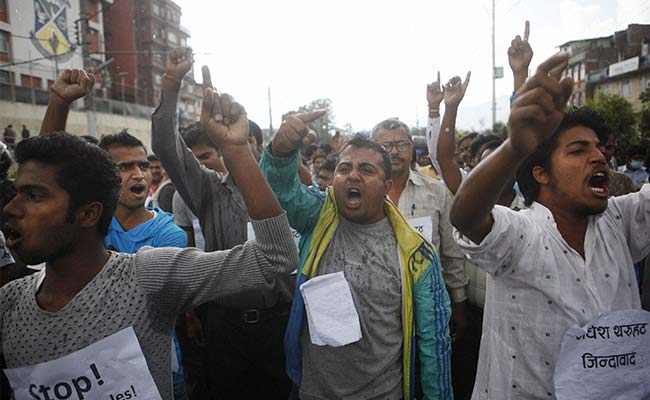 Protesters have blockaded trucks from India, leading to acute shortages of fuel and medicine in the landlocked Himalayan nation of 28 million people.

Kathmandu: Unrest over Nepal's new constitution has led to severe shortages of fuel, food, medicines and vaccines, putting more than three million children at risk of disease during the harsh winter months, the UN children's agency UNICEF said on Monday.

Nepal has been in turmoil since September when it adopted a new constitution, sparking protests by members of the ethnic Madhesi groups, who argue that the country's charter does not reflect their interests.

Protesters have blockaded trucks from India, leading to acute shortages of fuel and medicine in the landlocked Himalayan nation of 28 million people.

UNICEF said child survivors of two major earthquakes in April and May could be worst hit by the shortages. The tremors killed nearly 9,000 people and damaged or destroyed nearly 900,000 houses. Many remain homeless.

Newborn babies are at particular risk, as fuel shortages mean fewer women can get to hospitals and health centres to give birth, UNICEF said.

"The plight that children and their families are facing in the country has been worsening by the day and will deteriorate further in the winter months," UNICEF's regional director for South Asia, Karin Hulshof, said in a statement.

"There is no time to lose," she added.

The fuel shortage has led to an increase in the use of firewood in homes, which raises the risk of pneumonia. More than 800,000 Nepali children under five contracted the illness last year, and around 5,000 died, the agency said.

The government's regional medical stores have already run out of BCG vaccines against tuberculosis, and stocks of other vaccines and antibiotics are critically low, UNICEF said.

"The risks of hypothermia and malnutrition, and the shortfall in life-saving medicines and vaccines, could be a potentially deadly combination for children this winter," UNICEF's executive director, Anthony Lake, said in a statement.

"During my recent visit to Nepal, I witnessed first-hand the precarious living conditions of many of the earthquake survivors," he added.

"They could now be facing a new disaster - without adequate food, protection from the cold, or healthcare."