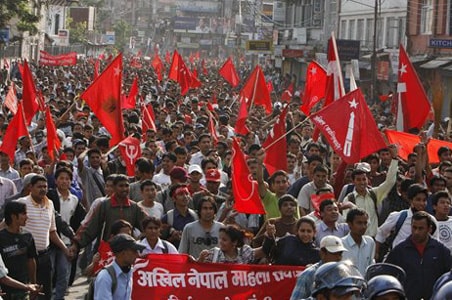 Kathmandu: Nepal's Maoists have accused India of being behind the President Ram Baran Yadav's "unconstitutional" move to block the sacking of army chief, alleging that he was "directly dictated by New Delhi".

"That is why we have resigned in protest so that morally we get the high ground to fight against the forces who are trying to restore monarchy and scuttle the new democratic republic in Nepal," he said.

Asked by an Indian TV channel if the Maoists will join the new government, he said, "The so-called president who is directly dictated by New Delhi, has been sent messages to act against the elected government and (he) has restored the sacked army chief."

"The President should (admit that it is unconstitutional decision) and then only we can think of joining the government otherwise we will go to the streets and gather the masses to fight against the anti-democratic party," he said.

Announcing his resignation earlier in the day, Prachanda accused the President, who belongs to pro-India opposition party Nepali Congress, of taking an "unconstitutional and undemocratic decision".

He made a thinly-veiled attack on India over its reported backing of army chief General Rukmangad Katawal.

Promoted
Listen to the latest songs, only on JioSaavn.com
"I will quit the government rather than remain in power by bowing down to the foreign elements and reactionary forces," he said.

His party is ready to maintain "cordial relations" with the neighbouring countries but will "not accept any intervention," he added.