Migration, and Then a Quake, Rob Nepal of Its Young Men 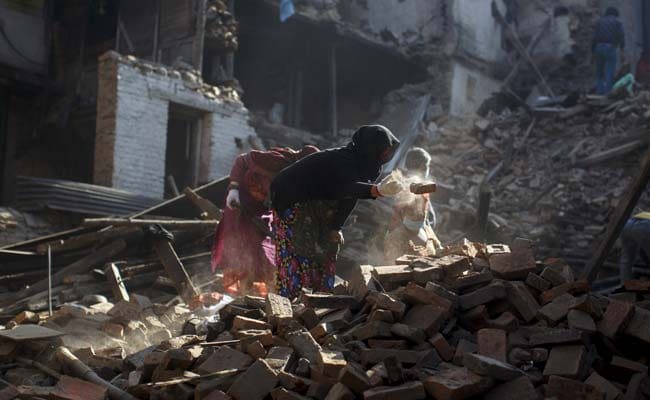 Local residents clear the rubble from their homes which were destroyed after last week's earthquake in Nepal. (Reuters Photo)

Kathmandu, Nepal: When the dense pillar of smoke from cremations by the Bagmati River was thinning late last week, the bodies were all coming from Gongabu, a common stopover for Nepali migrant workers headed overseas, and they were all of young men.

Hindu custom dictates that funeral pyres should be lighted by the oldest son of the deceased, but these men were too young to have sons, so they were burned by their brothers or fathers. Sukla Lal, a maize farmer, made a 14-hour journey by bus to retrieve the body of his 19-year-old son, who had been on his way to the Persian Gulf to work as a laborer.

"He wanted to live in the countryside, but he was compelled to leave by poverty," Lal said, gazing ahead steadily as his son's remains smoldered. "He told me, 'You can live on your land, and I will come up with money, and we will have a happy family.'??"

Weeks will pass before the authorities can give a complete accounting of who died in the April 25 earthquake, but it is already clear that Nepal cannot afford the losses. The countryside was largely stripped of its healthy young men even before the quake, as they migrated in great waves - 1,500 a day by some estimates - to work as laborers in India, Malaysia or one of the Gulf nations, leaving many small communities populated only by elderly parents, women and children. Economists say that at some times of the year, one-quarter of Nepal's population is working outside the country.

The absence of young men has been keenly felt over the last week, as those left alive in isolated villages dug with their hands trying to free survivors. Many of the children caught up in the earthquake's destruction were already growing up without fathers at home. Frail older people have been left to manage the aftermath on their own. And economists say that unless the government acts swiftly to create work opportunities at home, the exodus of young people will accelerate after the relief operation ends, permanently handicapping the country's ability to rebuild.

"The government has to create a relief package if they want to retain them," said Chandan Sapkota, chief economics officer at the Asian Development Bank in Kathmandu. "Somebody needs to plow the field, plant the rice. If these temporary migrants are given enough incentives to stay in the village, their first instinct would be to do that. But it has to be really fast."

The Gongabu neighborhood was one of the deadliest places in Kathmandu. It is an area where recruiting agencies housed young village men awaiting work overseas, with several thousand budget hotels and guesthouses crammed in lanes near the long-distance bus station.

Among those killed in Gongabu was Ram Bahadur Chapagain, 26, whose body was distended and covered with flies after six days in the rubble.

Three men hoisted Chapagain's body on a plastic sheet and deposited it on the pyre. One took a handful of river water and dripped it into the mouth, and then drizzled his body with clarified butter to speed the burning. Then they stacked the body with logs until only one hand could be seen dangling down, its fingers curled.

Chapagain had been on his way to Saudi Arabia to work as a laborer, the men said, a decision made out of desperation after three fruitless years looking for a job in Nepal. He had said his goodbyes to his family months earlier, when he had been told he would soon be boarding a flight for the Gulf, but the recruiting agency kept announcing new delays, leaving him in limbo in Gongabu.

Bijaya KC, Chapagain's brother-in-law, watched the hand swell and shrivel in the fire.

The scale of the economic migration from Nepal has amazed development economists for many years. The Maoist insurgency that racked the country for 10 years ended in 2006, but the economy never recovered afterward. Today, manufacturing contributes only 6 percent of the country's gross domestic product, and in some areas, electricity is available for no more than 10 hours a day. The earthquake will make things much harder for the country's poorest people, especially in rural areas where most Nepalis live.

The Asian Development Bank has already downgraded its projections for economic growth in Nepal to 4.2 percent this year, from 4.6 percent before, but Sapkota said he now believes the fall will be steeper, to the range of 3 percent to 3.5 percent. The tourism industry, which had been growing and contributing about 9 percent of the country's output, is now expected to drop off sharply.

Though men will be kept busy during the initial relief effort, when that ends, Kathmandu's factories and construction sites could face a labor shortage, Sapkota said. Some will decide to return to their native villages to rebuild houses, but jobs there are scarce, and after that, many will decide that they can best help their families by going abroad and sending their earnings home, he said.

"If you are with your family, but without a job, without money, how exactly are you going to help?" he said.

The country's absent young men have been sorely missed over the last week, according to Kanak Mani Dixit, the founding editor of Himal Southasian magazine and one of Nepal's most prominent journalists. It has been felt at funerals, where, according to custom, bodies are carried on bamboo poles without being laid down, sometimes for hours, until the burial party reaches a riverbed.

And their absence had a profound effect when the earthquake struck, said Dixit, who said he went to help elderly neighbors who lived alone after he had moved his own parents to safety.

"The young adults - the sons - are mostly away, in Malaysia, the Gulf, indeed parts of India," he said. "The house shudders and you cannot be assisted. You are slow. And you get caught."

Promoted
Listen to the latest songs, only on JioSaavn.com
In Gongabu, Sumah Thapa, a longtime resident, was thinking about the young men who had been trapped in the guesthouses. He always felt sorry for them, he said, the provincial boys new to the city who needed directions and were uncertain how to go about looking for work. Sometimes he tried to give them advice.

"I don't know them, but they are good men," he said. "Going to foreign countries to work is hard, very hard. Now their families will have nothing."
© 2015, The New York Times News Service