Seven brands of strawberries in Australia are now believed to be contaminated with needles and pins, prompting warnings from authorities to slice the fruit before eating 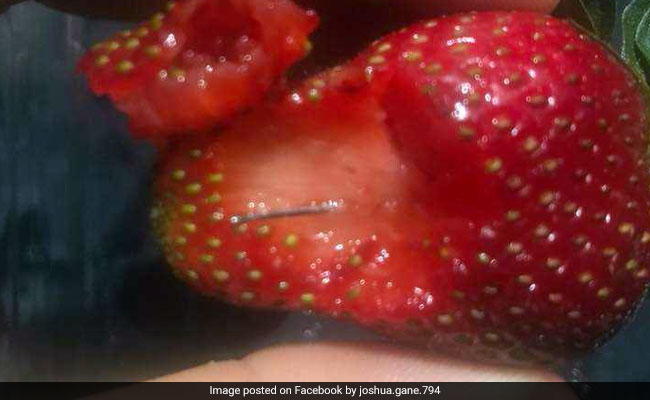 Needles have been found inside strawberries in two states, prompting alert across Australia

Needles have been found inside strawberries in two more Australian states, police said on Monday, broadening a health scare that has caused supermarkets to recall brands and farmers to dump fruit amid the peak growing season.

One man in the state of Western Australia and a girl in South Australia reported finding needles in their strawberries in the past two days, according to police.

Seven brands of strawberries in Australia are now believed to be contaminated with needles and pins, according to police reports, prompting warnings from authorities to slice the fruit before eating.

Queensland Police Commissioner Ian Stewart told reporters on Monday that it was unclear if the contamination was the result of a single person acting alone or several people acting independently and that tracing back through the complex supply chain was taking time.

Consumers in Queensland were the first to report finding needles embedded inside strawberries.

"A member of the public today presented at York Police Station to report his concerns that a needle had been in a punnet of strawberries," the Western Australian police said in a statement.

"The member of the public advised he located the needle in his sink after preparing strawberries for his family. He did not recall the needle being in the sink prior to preparing the strawberries."

South Australian police meanwhile said that they were advising members of the public to check punnets of Mal's Black Label strawberries following a report of a needle found inside the fruit on Sunday morning.

"When the fruit was consumed this morning, a needle was found inside one of the strawberries. There were no reported injuries," state police said. Police in both states are investigating.

Both of New Zealand's biggest supermarket chains decided on Monday to halt Australian strawberry orders for now, even though the country's Ministry of Primary Industries confirmed none of the contaminated strawberry brands had made it on to shop shelves.

Australian police said the contaminated fruit appeared to have originated at a Queensland-based supplier. Queensland is a major strawberry producer in a national industry worth more than A$130 million ($93.22 million) a year.

Woolworths Group has removed all the affected brands from shelves in its supermarkets, but continues to sell other varieties of the fruit.

Jamie Michael, who is head of the Western Australia Strawberry Growers Association, told the Australian Broadcasting Corp that his farm had dumped strawberries in the peak of the season and that if shoppers stayed away, some growers would not be able to afford to plant a crop for next year.