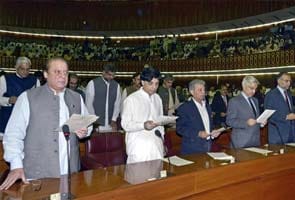 Islamabad: Pakistan Prime Minister Nawaz Sharif, formally elected by parliament on Wednesday, again called for an end to US drone strikes aimed at militants which many view as a breach of Pakistan's sovereignty.

Ousted in a bloodless military coup in 1999, Sharif won enough seats in the May 11 general elections for his Pakistan Muslim League-Nawaz (PML-N) party to operate without a coalition.

"This daily business of drones has to stop immediately," he told parliament. "Other countries must respect our sovereignty and address our concerns."

A US drone strike killed the No. 2 of the Pakistani Taliban in the North Waziristan region last week in the first such attack since the election in which the use of the unmanned aircraft was a major issue.

It was also the first reported US drone strike since President Barack Obama announced that the United States was scaling back its drone programme.

Despite a bloody Taliban campaign in the lead-up to the elections, in which more than 100 people were killed across the country, Sharif stopped short of mentioning the Islamist group in his inauguration speech.

"We have to end lawlessness and terrorism," he said. In his election campaign, Sharif offered to hold talks with the militants.

Washington has a long-standing alliance with the nuclear-armed country of 180 million, but ties have already been strained by concerns that Islamabad is supporting militants fighting US troops across the border in Afghanistan.

Concerns over Pakistani sovereignty peaked in May 2011 when Osama bin Laden was found and killed in a town not far from Islamabad in a secretive operation by US Navy SEALS.

Promoted
Listen to the latest songs, only on JioSaavn.com
Perhaps Sharif's biggest challenge will be managing his government's relationship with the all-powerful army, which has ruled Pakistan for more than half its history since independence from Britain in 1947.

In what is being seen as a way to get to grips with the army in the early days of his tenure, Sharif has decided to take on foreign and defence portfolios himself.
© Thomson Reuters 2013