Italy said it had responded to pleas from non-profit organisations working in Afghanistan to help Sharbat Gula leave the Taliban-controlled country.

Sharbat Gula, the green-eyed Afghan woman immortalised decades ago on a National Geographic cover, has been evacuated to Italy, the Italian government said on Thursday.

"Afghan citizen Sharbat Gula has arrived in Rome," it said in a statement, without giving a specific date.

Rome said it had responded to pleas from non-profit organisations working in Afghanistan to help her leave the Taliban-controlled country, "organising for her to travel to Italy as part of the wider evacuation programme in place for Afghan citizens and the government's plan for their reception and integration".

Gula became arguably Afghanistan's most famous refugee after US photographer Steve McCurry captured her portrait in a Pakistan camp in the 1980s and it was published on the front cover of the National Geographic magazine.

Gula said she first arrived in Pakistan an orphan, some four or five years after the Soviet invasion of 1979, one of millions of Afghans who have sought refuge over the border since.

She was deported back to Afghanistan in 2016 after she was arrested for living in Pakistan on fraudulent identity papers. 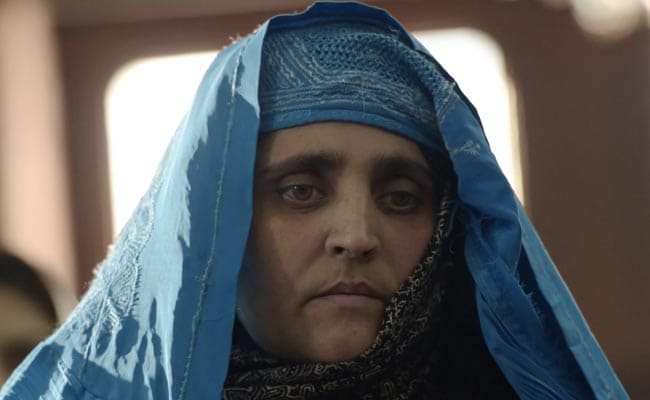 Afghan refugee Sharbat Gula, 45, looks on as she meets with then Afghanistan President Ashraf Ghani at the Presidential Palace in Kabul. (File)

In early September, Rome said it had evacuated almost 5,000 Afghans from Afghanistan after the Taliban seized power in August.

Italy earlier this month said it had granted citizenship to Afghanistan's first woman chief prosecutor, Maria Bashir, after she had landed in the European country on September 9.

Italy was one of five countries most involved with NATO's US-led mission in Afghanistan along with Germany, Britain and Turkey.