Christina Koch and Jessica Meir ventured outside the International Space Station just months after NASA had to cancel an all-female spacewalk because of a spacesuit-sizing problem. 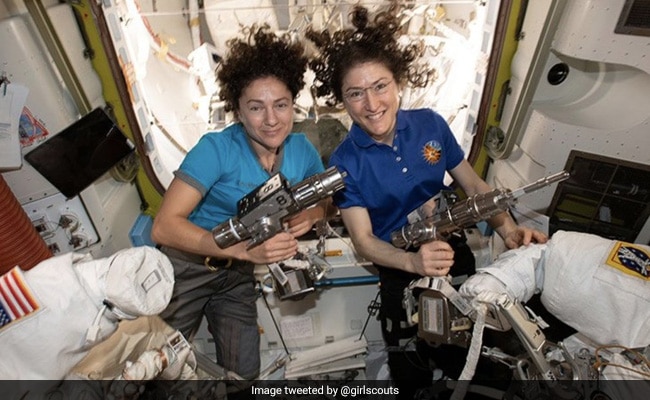 The all-female spacewalk - the first of its kind "in human history," the agency said - began at 7:38 a.m. Eastern time as the two American astronauts set their suits to battery power mode.
Koch was first to venture out of the ISS with a red tether attached to her suit.

Meir soon followed, carrying a tool bag as she made her way out of the hatch at 7:49 a.m. The spacewalk was originally scheduled for 5-and-a-half hours, but the crews successfully completed their main task and the mission was extended to more than seven hours so the astronauts could perform some additional jobs.

The historic float outside the orbiting laboratory into the vacuum of space came several months after another all-female spacewalk was canceled because NASA did not have enough spacesuits in the right size. And it's being heralded as a huge step forward for the agency at a time when NASA continues to work to highlight the contributions of women.

House Speaker Nancy Pelosi, D-Calif., celebrated Koch and Meir "for leaving their mark on history" and called them "an inspiration to women & girls across America."

3, 2, 1...blast off! Here's to making history and two more female role models girls everywhere can look up to! Thank you, @Astro_Christina and @Astro_Jessica! @Space_Station#AllWomanSpacewalk#GirlScoutspic.twitter.com/pU8yMIa97Y

At a media briefing before the spacewalk, NASA Administrator Jim Bridenstine said the agency would build on the astronauts' efforts and send the "next man and the first woman" to the moon by 2024, an effort the agency has dubbed "Artemis" after the twin sister of Apollo. Friday's spacewalk is another milestone toward making space more available to everyone, he said.

In the Space Operations Center at NASA's headquarters, Bridenstine watched the beginning of the spacewalk Friday with space station managers and a few members of Congress and pointed out that 15 women have now performed spacewalks.

Koch, who is scheduled to spend 328 days aboard the station - the longest ever by a woman - has said she embraced the historic significance of the adventure she was about to embark on.

"In the past, women haven't always been at the table," she said in an interview with NPR from the space station. "It's wonderful to be contributing to the human spaceflight program at a time when all contributions are being accepted, when everyone is having a role, and that can lead in turn to an increased chance of success."

Meir said the spacewalk "shows all the work that went in for the decades prior - all of the women who worked to get us to where we are today. The nice thing for us is we don't even really think about it on a daily basis. It's just normal. We're part of the team. . . . It's really nice to see how far we have come."

Friday, October 18 marks a historic day: The first ever all-female #spacewalk! Want to share congratulations or words of encouragement for @Astro_Jessica or @Astro_Christina? Send us a photo with your well-wishes and we might send it to the crew or air it on our live broadcast! pic.twitter.com/zpreFMNJnR

Ken Bowersox, acting associate administrator for Human Exploration and Operations at NASA, said in a teleconference Friday that he hopes two women completing spacewalks will become routine one day. He noted that physical characteristics of women have made it harder in the past to do spacewalks because of the design of spacesuits. Spacesuits alone weigh 280 pounds on the ground, but nothing in space, according to NASA.

"There are some physical reasons that make it harder sometimes for women to do spacewalks," he said. "It's a little bit like playing in the NBA. You know, I'm too short to play in the NBA. And sometimes physical characteristics make a difference in certain activities. And spacewalks are one of those areas where just how your body is built in shape, it makes a difference in how well you can work the suit."

But as different kinds of people have entered space, NASA has adjusted its suits, Bowersox said. Bridenstine quickly added that the agency is "really focused on making sure that the spacesuits are available for everybody." And he said that because women appear to fare better in microgravity in some regards--their vision doesn't suffer as much as men's - it makes "them better at spaceflight than men."

Both Koch and Meir were selected as part of NASA's 2013 astronaut class, the first with an equal number of men and women. But women remain an overwhelming minority among the rank and file at NASA and the industry more broadly. Women make up about a third of NASA's workforce, 28 percent of its senior executive leadership and 16 percent of senior scientific employees, according to a survey done by the agency.

Bridenstine said getting more women into the agency was a top priority. "We're making significant progress in this area and have been for a number of years," he said. "But we're not done. There's a lot more to do." He said that events like Friday's spacewalk are "what inspires tomorrow astronauts, and we want tomorrow's astronauts to represent all of America."

Spacewalks are among the mostly grueling work that astronauts undertake in space. They are physically taxing and mentally challenging, astronauts have said - like taking an exam while running a marathon.

Before becoming an astronaut, Koch, 40, was an electrical engineer at NASA's Goddard Spaceflight Center, where she worked on scientific instruments used in the study of cosmology and astrophysics. She later became a research associate in the U.S. Antarctic Program, which included a year-long stay at the South Pole.

Meir, a scientist, has a doctorate in marine biology. She previously worked at Lockheed Martin supporting human physiology research and participating in research flights for NASA on reduced gravity aircraft as well as in an underwater habitat. She also has studied the physiology of animals in extreme environments.

NASA was hoping to have an all-female spacewalk in March. But it was canceled after astronaut Anne McClain discovered that the spacesuit she was to wear did not fit properly. Instead, astronaut Nick Hague went in her place.

On Friday, there were no such hiccups as the spacewalk began.
"These are the kind of real role models we can look up to," tweeted Sen. Tammy Duckworth, D-Ill.

"This is a remarkable moment highlighting the immense progress women have made in becoming equal partners in humanity's search for greater knowledge of space," Sen. Jeanne Shaheen, D-N.H., wrote on Twitter.

President Donald Trump congratulated Koch and Meir via teleconference this afternoon."You represent this country so well. Our country is very proud of you," he said with Vice President Mike Pence on his right and daughter Ivanka to his left.

"First the moon and then we go to Mars," he said.